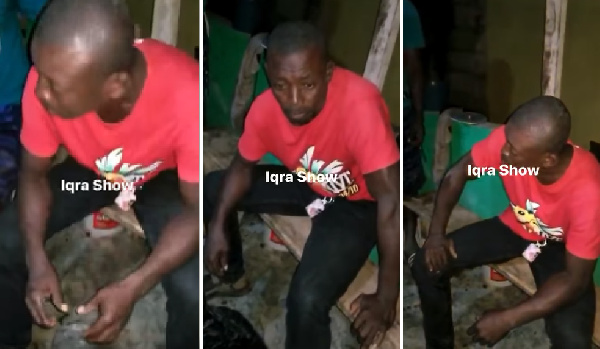 Screenshot of the alleged gravedigger

A gravedigger has been apprehended over allegations that he was selling body parts of the dead.

The suspect by name Haruna was 'exposed' by a Facebook user, Junior Muntari 1, after he was tricked by some residents of Kasoa who had gotten a hint that he was into that 'trade.'

In a nearly three-minute video shared on Facebook, Haruna is accosted by some men demanding that he unwraps some black polythene bags he had brought.

"You are selling bones of people; I have caught you with people's bones live, unwrap it," one person is heard saying in Hausa.

The video shows some material from one polythene, which the commentator says is human flesh and another, as bone from the skull.

"He is used to doing this at the cemetery for a long time, I raised the issue, but people thought I was exaggerating; here it is, you are all seeing it live. He brought it from Awudome," the commentator added.

According to the narrative, Haruna had been asked by someone for body parts of dead people, and another person had confirmed being the medicine man who had demanded it.

"We tricked you, but if you were a good person, you would have asked how we got your contact, but did you?" the supposed medicine man asked.

He reportedly charged 400 cedis for the consignment, out of which GHc100 was paid to him via mobile money.