VIDEO: I was served tea but not with biscuits - Rojo Mettle Nunoo tells court 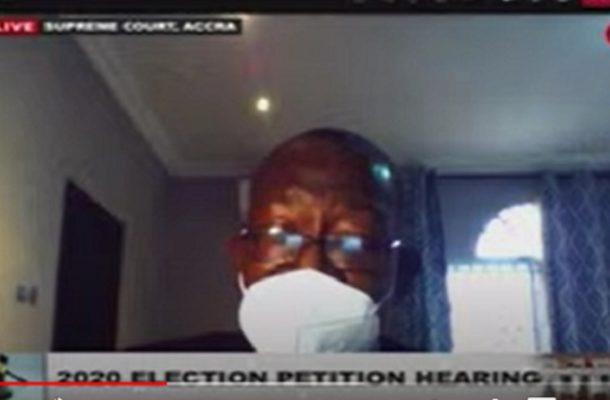 The 2020 election petition continued on Monday 8th February,2021, with the third witness of the petitioner, Rojo Mettle Nunoo taking his turn in the witness box via zoom due to ill health.

During the cross examination of the petitioner's third witness, there was drama in the apex court when counsel for the first petitioner that is the Electoral Commission asked the witness a question.

Rojo Mettle Nunoo says he was served tea by the Chairperson of the Electoral Commission, Jean Mensah when he went to her office to make complaints about anomalies her saw in the various results that were brought in from various Regions to the EC strong room.

Counsel for the EC, Justin Amenuvor during cross examination asked the third respondent that you were offered tea with biscuits and had a friendly chat with the EC Chairperson but Rojo[petitioner's third witness] answered that is inaccurate as “I was served tea but not with biscuits,” with the whole court bursting into laughter.

According to Mr Nunoo he had gone to the EC chair to make known certain infratcions he observed with the collation of results at the EC strong room.

The third witness was supposed to have testified on Friday but due to objections raised by the counsel for the second respondent, Akoto Ampaw praying the court to struck out 23 paragraphs out of the 32 paragraphs in his witness statement as it was not part of their pleadings.

After  lengthy presentation by both lead counsels of the second respondent and petitioner respectively, Akoto Ampaw and Tsatsu Tsikata, the Justices of the Supreme Court retired into their chamber to deliberate on the arguments made by the two lead counsels before coming out with their verdict.

The Chief Justice Anin Yeboah announced the verdict that the court after deliberations have struck out paragraphs 4,5,6,7 and 18 of the third Plaintiff/Petitioner witness, Rojo Mettle Nunoo.