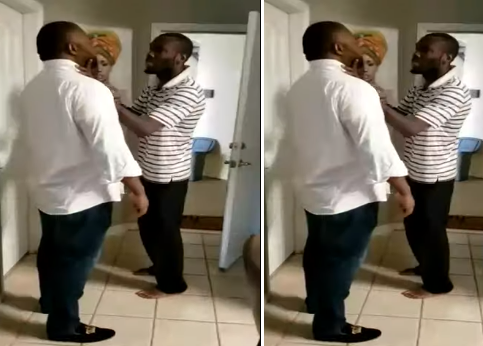 It has emerged that Ghanaian pastor Sylvester Ofori, days before fatally shooting his wife threatened his brother-in-law that he would kill his sister to prove that he was not a fake pastor.

Ofori is based in the United States of America.

The late Barbara Tommey’s family in a video cited by GhanaWeb, had accompanied her to her estranged husband’s home to pick up some documents when she was attacked by the husband in the presence of her family members.

“I came in here and I told you to sit back. I told you we are not here to argue with you, why did you f**ken attack her?” Perry quizzed.

Perry then instructed Ofori to go to the other room and not to come out.

Pastor Ofori then confronted his brother-in-law saying, “You were the same person who supported me at the wedding, right? Now you’re here to support your sister, the same sister who the pastor told you that, she was a witch, am I right?”

Perry then responded: “We don’t know whether you’re a Komfo Anokye or a pastor my friend, get the f*k out of here before I f*k you up. We did not come here for you, don’t let me hurt you,” angry Perry told his brother in-law.

Perry further accused his brother-in-law of being a fake man of God.

Pastor Ofori in response said, “If I don’t kill your sister then I am fake.”

Perry then advised his sister to call the cops and file a complaint, but Barbara declined.

“Call the cops. We don’t play with threats like this,” Perry told his sister.

Barbara replied that her brother should stop those comments because she did not want things to escalate.

However, the brother explained that if the husband, who is a pastor, had threatened to kill her, then there is no time to waste.

Watch the exchanges Sylvester Ofori and his brother-in-law.

Barbara Tommey, 27, according to the Orlando Police Department (OPD) was shot several times by her husband, Sylvester Ofori, near her business front doors on the 4600 block of Gardens Park Boulevard, some minutes to 9.00 am on Tuesday.

Ofori, 35, was arrested and taken into custody on Tuesday evening. He is being held at the Orange County Jail without bond on a charge of first-degree murder with a firearm.

Investigators during a Wednesday morning press conference did not release a motive or say whether there was a history of domestic violence of which OPD was aware, citing an active investigation.

“The background story and previous dealings with them, be it through our calls for service should there have been any or any previous incidents between them will be identified at a later time,” Detective Matthew Rogers said.

Rogers added that Tommey and Ofori were in the middle of a divorce and she hadn’t lived at the apartment they shared for months. No records documenting their divorce could be found. The couple were married in September 2015, according to a marriage licence.

Sylvester Ofori is a pastor at Floodgates of Heaven International Ministries, a church based in Parramore. He described himself as a prophet and motivational speaker. His ministry has reached tens of thousands of people.

A day before the shooting, Sylvester Ofori posted on his Facebook page that “One thing ppl gotta understand about extremely kind, nice, loving people is that their other side is just as EXTREME.”

Some people who responded to the post after news broke that Tommey had died, prayed for her to rest in peace, whilst others expressed anger or disbelief about what Ofori did.

“This was a false prophet,” one contributor wrote. “God warned y’all about false prophets. [T]his guy deserves every pain he gets.”

Tommey is often mentioned on social media posts and by followers as Pastor Ofori’s “first lady”.