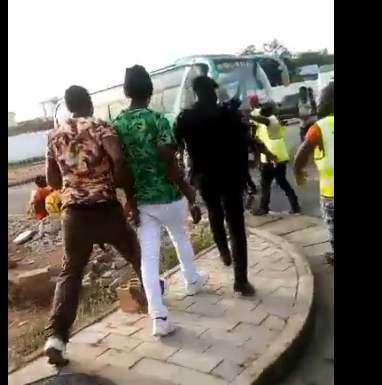 Some irate supporters of Ghana Premier League side Ebusua Dwarfs had to be restrained from attacking their goalkeeper, Issah Razak after their 1-0 loss to Regional rivals Elmina Sharks at the Cape Coast Stadium on Sunday.

The furious Dwarfs fans accused the goalkeeper of staking a bet that is why he conceded the penalty which was converted by Benjamin Boateng to give the host all three points.

It had to take efforts from the Police and  stewards on duty that day to prevent the livid group of supporters from going into the team bus to assault the goalkeeper.

The match between Elmina Sharks and Ebusua Dwarfs looked like a stalemate until around the 86th minute when the Dwarfs goalie committed a foul in the penalty box and the resultant penalty was converted by Benjamin Bismark Boateng.

Ebusua Dwarfs had managed to frustrate the home side and were three minutes away from an important point until Benjamin Boateng scored an 87th-minute penalty to take them level on points (23) with Dwarfs.

The win means Sharks have not tasted defeat against Dwarfs since 2018. They have met six times, with Sharks securing two wins and four ending in stalemates.

Despite being level on points, Dwarfs are 10th in the table while Sharks sit 11th after 18 matches.