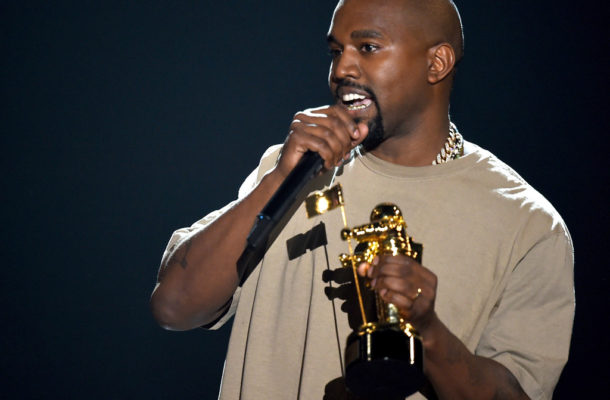 Kanye West, showed why he is referred to as The king of speeches in the Hiphop game last night at the MTV Video Music Awards.

The 39-year-old rapper, did not disappoint when he took to the stage to give a speech to premier his new video for his song, Fade.

With the crowd chanting Yeezus, the rap star said: 'I am Kanye West and it feels really great to say that - especially this year. I came here to present my new video but before I do that I'm going to talk.'

He made a few jokes about his famous video, explaining that Famous was an expression of arts, and their present situation as Famous people.

'For people to understand just how blessed we are,  Famous was an expression of our now, our fame right now, us on the inside of the TV... I had the audacity to put Anna Wintour right next to Donald Trump.'

Kanye, explained that his love for everyone was the reason he called 'her', making reference to Taylor Swift, who was conspicuously missing from the event though she was nominated. Introducing his very racy video for track Fade, Kanye reminded the VMA's crowd that they are the blessed ones while simultaneously weighing into the issue of gun violence.

'So I was speaking at the Art Institute last year and one kid came up to me and said ''Three of my friends died and I don't know if I'm going to be next.''

Watch the full video of the speech below;