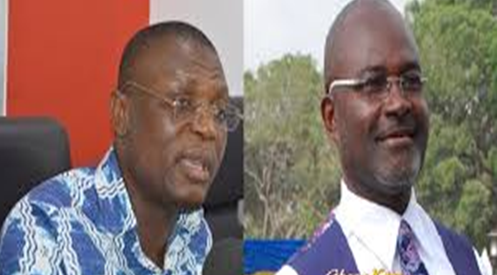 Kofi Adams established that although he dislikes Kennedy’s style of politics, he is in full support of his plan.

Adams’ messages were read live on NET2TV by Kennedy who obviously could not hide his excitement that his efforts were noticed by a member of the opposition party.

“It’s self-gratifying to get a message from Kofi Adams. He said although he doesn’t like my politics, he supports what I’m doing. And that, if I don’t continue like this, there will be no tomorrow,” Kennedy Agyapong stated.

The Assin Central MP said he least expected that such a message could come from Kofi Adams.

The Member of Parliament for Assin Central, Kennedy Agyapong identified Bishop Daniel Obinim and some other pastors as charlatans parading as servants of God in the country.

He has among several allegations accused the pastor of sleeping with countless women including married ones and using some for sacrifices.

He also listed the names of different ladies that he claimed Bishop Obinim had committed adultery with.

Meanwhile, Bishop Daniel Obinim, the founder of the International God's Way church, has been arrested by the Criminal Investigations Department (CID) of the Ghana Police Service over the publication of false news and falsification of documents.

According to the police, "He has been charged with the offenses of Publication of false news and Forgery of document contrary to sections 208 and 159 of the Criminal and other offenses Act, 1960 (ACT 29) respectively".

Not too long after the arrest, Assin Central Member of Parliament, Kennedy Agyapong is claiming to be the architect behind the arrest of controversial preacher Bishop Obinim.