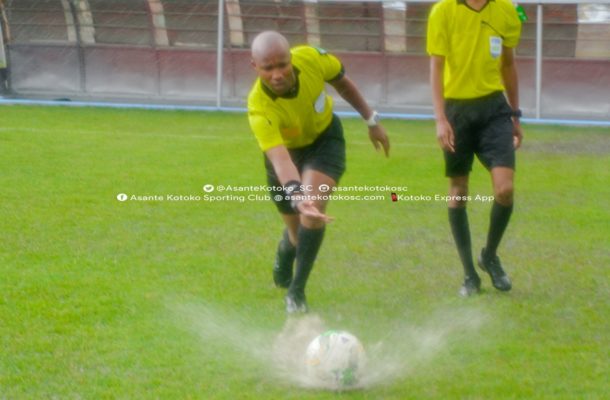 Kumasi Asante Kotoko have had their Caf Confederations first leg game against Ivorian side San Pedro Fc postponed after hours of torrential rainfall at the Baba Yara Sports Stadium.

The first half of the game ended goalless with none of the teams able to break the deadlock.

Kotoko had several attempts especially after Justice Blay fiercely headed a corner towards goal only for the goalkeeper Tape out of no where to pluck the ball away to safety.

Richard Arthur was also presented with an incredible chance after some good work from Richard Ocran but he blazed wide.

San Pedro broke free on the counter attack with winger Mundi Christo one on one with goalkeeper Felix Annan the keeper made himself big to smoother the ball away to safety.

The whole game it had been drizzling but just before the second half could begin the tempo of the rain increased prompting Kotoko officials to come on to the pitch to ascertain whether the game can continue or not.

Dr Kwame Kyei and new GFA president Kurt E.S Okraku all stepped on to the turf before the referee finally emerged from the tunnel.

After several bouncing of the ball and kicking on the penalty spot in collaboration with the match commissioner they decided to call off the game.

Even before an official decision could be announced, the flood lights had been turned off and a melee ensued between officials of San Pedro Fc and Kumasi Asante Kotoko.

San Pedro Fc officials and players wanted the match to go ahead going as far as to suggest that if given 10 minutes they could scoop the rain water from the soggy pitch.