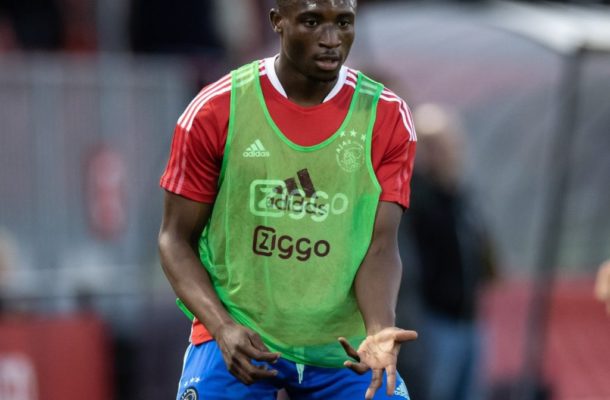 Ajax and Ghana midfielder, Kudus Mohammed has been named in Ghana's final squad for the African Cup of Nations tournament which starts in Cameroon on the 9th January,2022.

The player who was injured but has now returned to fitness has been captured in photos and videos training with his Ajax teammates in a winter training camp in Portugal.

The player sustained an injury during Ghana's  1-0 win over South Africa in the 2022 World Cup qualifiers at the Cape Coast Stadium.

The creative midfielder got injured when Ghana faced South Africa in the last match of the 2022 World Cup qualifiers.

In the 10th minute, the Ajax midfielder signaled to the bench that he needed attention after an off the ball incident resulted in his injury.

After persistent treatment he was taken off in the 12th minute with Daniel Kofi Kyereh on as his replacement.

Ajax coach, Erik Ten Hag indicated that his player is not yet fully fit after getting injured playing for Ghana in November in the 2022 World Cup qualifier.

Since joining Ajax from Danish side FC Nordsjaelland, the Ghanaian midfield has been blighted by persistent injury concerns.

Speaking  after  Ajax's 5-0 victory over Fortuna Sittard, Ten Hag averred that the player lacks the fitness to play at a major tournament like the AFCON.

“It is very likely that he will stay here,” said Ten Hag.

“He has been injured four times in a year and a half and is now injured again with the national team. If you want to participate in such a tournament, you must not only be injury-free, but also match fit. And of course he is definitely not. If he has to play many matches in such a tough tournament in a short time, the risk of injury is very great. He’s just not fit to play.”


The Ghanaian midfielder who has had an injury ravaged Ajax career has only play six times this season for his side after multiples injuries.

It was no different last season where he played a total of 882 minutes in 22 matches for Ajax but has 10 caps for Ghana.