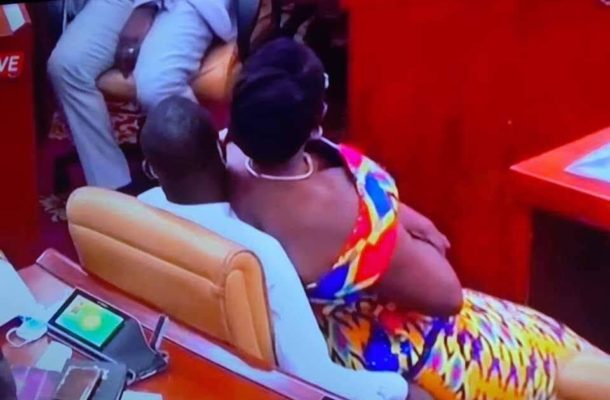 The transition from the 7th Parliament to the 8th Parliament of the fourth Republic has been blighted by pure chaos and pandemonium.

Ghanaians have seen the good the bad and the ugly in Ghana's Parliament as members of parliament literally exchanged blows, some kicking the erected Electoral Commission's voting boot among others.

It all started when the National Democratic Congress (NDC) faction came very early to occupy the seats where usually the majority in Parliament sits.

To their utter surprise the New Patriotic Party(NPP) had to occupy the minority side of Parliament.

But the Member of Parliament for Ablekuma West, Ursula Owusu-Ekuful would not budge and sat on the lap of the MP for Juaboso Constituency, Kwabena Mintah Akandoh.

In the midst of the chaos and disorder in the August house, Kwaben Mintah Akandoh was 'catching feelings' from the Ablekuma West MP, Ursula Owusu-Ekuful who was seated on his laps.