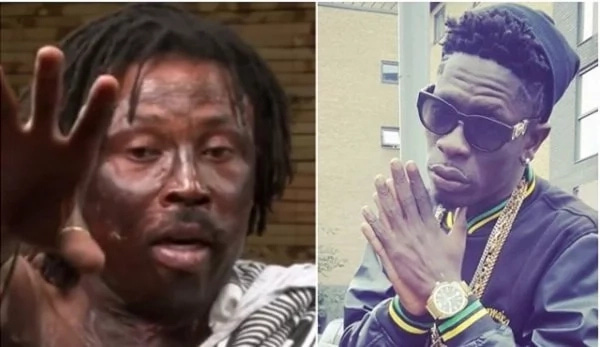 Shatta Wale has been spotted in a latest video praising the popular Ghanaian fetish priest.

According to the controversial musician, the spiritualist’s prophecy to him unlike many other ‘fake’ Ghanaian prophets has come to pass in his life.

The controversial dancehall artiste who is currently in the United States to receive an international award says he owns it all to Kwaku Bonsam for seeing good things ahead for him.

Shatta Wale in his live Facebook video insisted that although he has never contacted Kwaku Bonsam’s shrine for any spiritual assistance, the traditionalist prophesied his US award on May 14, 2016.

The dancehall artiste in his account revealed that the international award he is bringing home is accompanied by huge financial reward which cannot be compared to any other award he has received.

“Last year Kwaku Bonsam came live on Facebook and made some prophecies about me, saying I will receive an award and I mean international award and here I am today. I have not gone to bribe him in order to make such prophecies. He just came out and made those prophecies,” the musician told his followers.

Wale who was in jubilant mood in his Facebook live broadcast added that, “I want to thank him so much and may God bless him. Anyone who sees him [Kwaku Bonsam] should tell him to come for his stone because his prophecy has come true. I know anything he says is of God and that is why I believe him”.

The dancehall King was on Sunday March 18, 2018, honoured at the International Reggae & World Music Awards (IRAWMA) in Chicago.