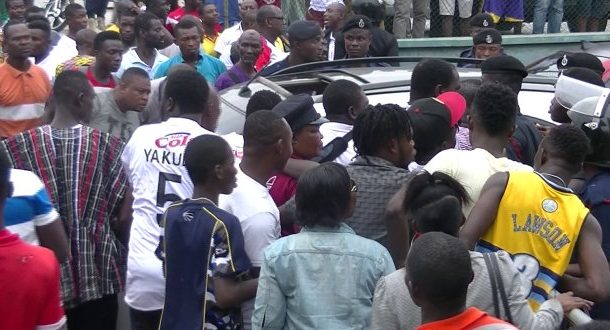 Disgruntled Hearts of Oak fans displayed their fury to the Hearts of Oak team after Sunday's 1-1 drawn game against Elmina Sharks at home at the Accra Sports Stadium.

The Phobians have all season managed just two home wins at their own back yard getting wins against Ebusua Dwarfs and Bechem United .

Aside that the phobains have recorded three drawn games and two loses at home .

After the final whistle fans of the team gathered outside the stadium to express their displeasure against the coach and his team with some even calling for the head of interim coach Nii Odoom.

It has been a topsy turvy reign so far for the Phobains recording impressive results away from home but dropping points on home soil.

It's making their quest to lift their first league title since 2008/2009 almost an impossibility since the Phobians now lie 9th on the league log with 17 points.