VIDEO: Man curses Police Offers for taking GHc500 from him 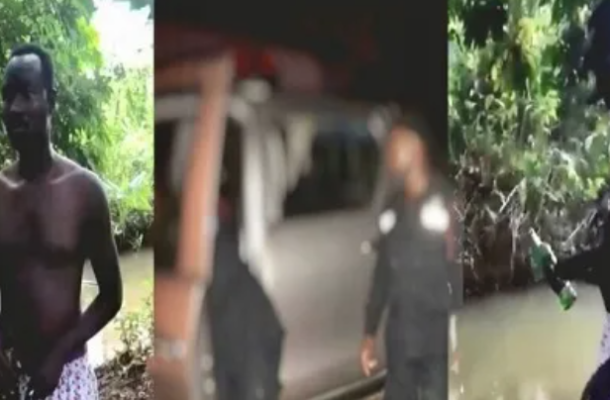 A video making round the internet shows a man with a bottle of drink summoning some police officers to the River god of his hometown Nana Yesu.

The man narrated his ordeal to the River god on how some police officers planted weed in his car to extort 500 cedis from him.

According to the man who identified himself as Tamimu Yayaha on Sunday January 2 he was driving to Asaamankese to buy car tyre.

On his way a police patron team stopped him and during their chat one of the police officers accused him of throwing weed at the back seat.

They brought him out of the front seat to the back seat only to find the weed.

Tamimu Yahaya told the River god that he believes the police planted the weed at the back seat when they stopped him and starting chatting with him.

He added that he was handcuffed and made to pay a bribe of 500 cedis before he was released.