VIDEO: Man of the match Ropapa Mensah scores as Hounds draw with Saint Louis in USL 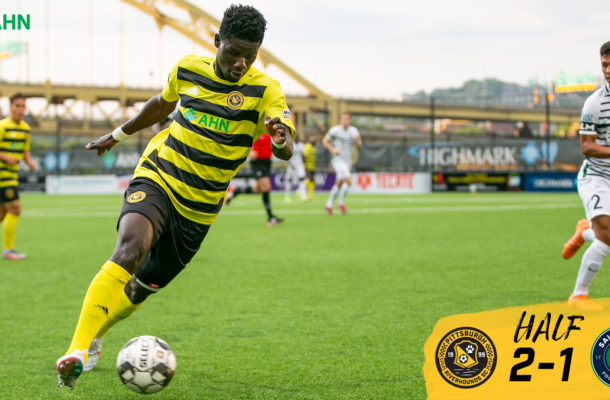 Ropapa Mensah started the scoring for the Hounds in the 16th minute, and Robbie Mertz added another in the 40th minute to give the Hounds a two-goal lead.

Kyle Greig cut the deficit to one for Saint Louis in first-half stoppage time, and Wal Fall scored the match’s final goal in the 57th minute.

The tie gives the Hounds a one-point lead over Hartford Athletic in Group F.

The two teams failed to record a shot in the opening 15 minutes of play.

The Hounds were on the attack in the 16th minute, after Mertz sent a pass to Steevan Dos Santos in the right side of the penalty area.

Dos Santos then sent a cross into the six-yard box, which deflected off a nearby defender and the crossbar.

Man of the match Mensah then kicked the ball over the line, giving the Hounds a one-goal lead.

Another chance came in the 40th minute, when Mertz regained possession in the left side of the penalty area after a deflection. The Pittsburgh native then sent a shot past Saint Louis goalkeeper Kyle Morton into the bottom-right corner to give the Hounds a 2-0 advantage.

Saint Louis’ best chance of the half came in the 45’+1, after Sam Fink sent a long pass to Greig in the six-yard box. The ensuing shot was saved by Tomas Gomez, but Greig was able to send the rebound into the bottom-left corner, making it 2-1.

After winning a free kick in the 57th minute, Saint Louis had a chance to even the game. Fall took the free kick for Saint Louis and sent a right-footed shot into the top-left corner, tying the game at 2-2.