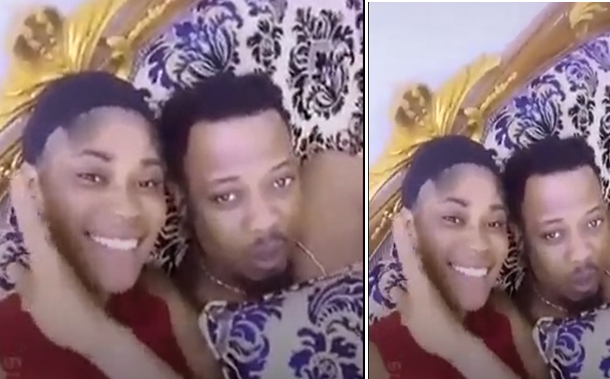 For one more reason, the founder and leader of Prophetic Hill Chapel, Prophet Nigel Gaisie is dominating social media and it is not because of his 2021 December watch night prophecies or the controversies it has triggered in the last few days.

A video of the church leader shirtless and lying in bed with a young lady acting cozy has gone viral on social media as of yesterday, January 4, 2022.

It is not yet known the source or how the video reached the internet, however, the content and context of the video has led to several questions, assertions and opinions being shared by various social media users.

As sighted by GhanaWeb, the video shows Prophetic Nigel Gaisie and the young lady, possibly in her late teens and early twenties, lying in bed with the head of the lady leaning towards that of the prophet.

A song by Nigerian artistes Adekunle Gold and Davido titled "High" is heard playing in the background and the lady is seen singing happily along while the prophet passed an inaudible comment.
In a related development, Prophet Nigel in a Facebook post which has since been deleted, has downplayed assertions of any sexual involvement between him and the lady in the video.

According to Prophet Nigel, the young lady whose name he gave as Sandra Mantey is the daughter of his blood sister. He thus asked the public to ignore the twist being ascribed to the context of the video by “wicked people.”
“This was just brought to my Attention. This is my blood sisters (sic) daughter her name is Sandra Mantey. They have Nothing about me so this (sic) what they will do!!! FUNNY PEOPLE .....IGNORE THEM*THIS GIRL IS MY BLOOD SISTERS DAUGHTER WICKED PEOPLE,” he wrote.

Watch the video and the reaction by Prophet Nigel Gaisie below: