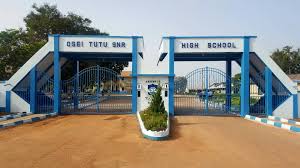 This was after the students who were aggrieved by Mr Aidoo’s strict invigilation in the ongoing WASSCE exam, stormed his farm and destroyed plants on the site.
The students after the act, left behind a message written on a placard with a stern warning to their assistant headmaster informing him of their next line of action should he continue to be strict.

“Mr. Adu, the stupid Administrator. Be careful with the way you deal with students at the examination hall. This is just a warning. We will amputate you if you fuck around,” the message left behind by the students read.

According to a Modern Ghana report, the students on the night after their act also stole the batteries in all four of the school’s buses.

A video of the farm destroyed by the students sighted by GhanaWeb shows what looks like banana and plantain plants completely cut down.

Mr Francis Aidoo is reported to have over the years enforced strict examination invigilation protocols in the school.

His strictness is said to have infuriated the current final year students when they wrote their Integrated Science paper last Thursday.

Following the attack on his farm and the threat issued against his life, the assistant headmaster has reportedly been advised to stay away from invigilation duties.

Watch video of the destroyed farm and the note left behind by the students:
Source: Ghanaweb