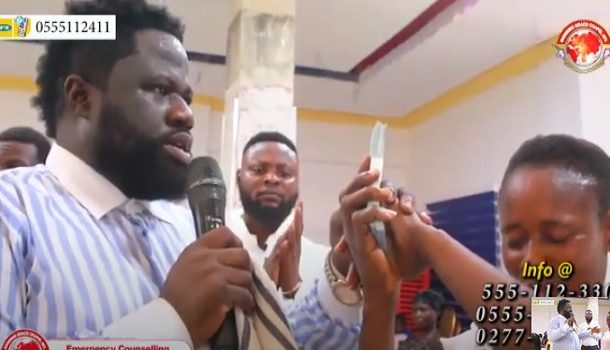 A Ghanaian prophet at the Shining Grace Chapel on Sunday did an unconventional deed when he donated the church's offertory to the congregants.

Known for his philanthropic works, Prophet Ogya Nyame surprised his church members by donating back the offertory to congregants who were in need.

This is not the first act of benevolence from the Leader and Founder of Shining Grace Chapel towards the needy in the society, as the act has been a part of him from time immemorial.

Reacting to his kind gesture, some beneficiaries of the offertory donation, amidst shedding tears, could not understand this act by the Prophet of God.

"I have been a Christian for 38 years and never have I seen this kind gesture from any pastor. You're the only one to have done that. I had been sick for a long time and no one was there to help. Had I not met you, I would have died by now", an elderly woman testified.

Prophet Ogya Nyame has over the period been consistent with charity works to persons within and outside his church.

One of his most recent and remarkable donations was his contribution to the Muslim community during the 2021 Sala festivities where he gifted a lot items including a full-grown cow.