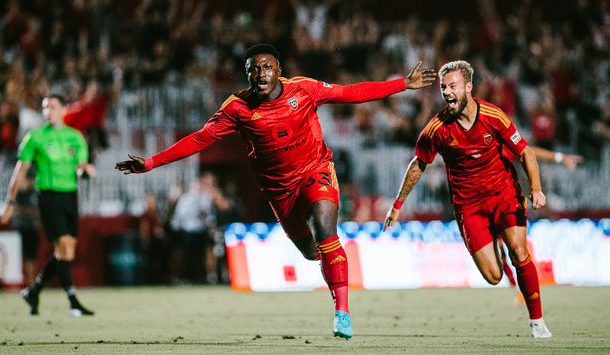 Ghanaian striker Richmond Antwi gave his lower tier American side a stoppage time draw on Sunday dawn in their 2-2 draw against Orange County.

Orange County took a 1-0 lead in the seventh minute when Milan Iloski took control of the ball in the center of the field and turned toward goal.

Rising’s Kevon Lambert poked the ball away from the forward, but the tackle pushed the ball out in front of Iloski, opening the door for him to run at the exposed center backs of Phoenix. Near the top of the box, Iloski cut to his left and slid a low shot just inside the post to goalkeeper Ben Lundt’s right side.

Lundt made an excellent save to deny Orange County of a two-goal lead in the 24th minute. A half-cleared ball sat up perfectly for Daniel Pedersen to hit on the volley from just outside the box. Lundt dove to his left side and slapped the ball out of the top corner of the goal before recovering and collecting the rebound.

Rising yanked a goal back just before halftime when Aodhan Quinn found Darnell King streaking down the right side. King did very well to catch the ball on his chest and push it into space inside the area. King fired low and hard with his first touch and Rising finally caught a break. The shot deflected off Orange County defender Albi Skeidi and redirected past goalkeeper Collin Shuttle to make it 1-1 in the 42nd minute.

Orange County came out of halftime and regained its one-goal advantage in seven minutes. The goal came on a corner kick played to the back post. Everyone on the field overran the ball except for Iloski who had time to bring down the ball and fire it on frame from close range. The shot cracked off the bottom of the crossbar and settled into the back of the net to make it 2-1.

Rising looked to have tied the match in the 77th minute when a corner played to the back post was headed on frame by James Musa. The well-placed header was plucked out of the top corner by Shuttle and the rebound was recycled by Phoenix, but the home side had its next two crosses blocked off by Orange County defenders.

Phoenix gained a one-man advantage when Orange County’s Michael Orozco was ejected from the match following a scrum in the 80th minute.

Rising pressed and found a second game-tying goal in the fourth minute of stoppage time when Kevon Lambert knocked Antwi a short pass at the top of the box. The forward turned and sprinted across the top of the box before firing a shot through a crowd that Shuttle could not see before it was in the back of the net.