VIDEO: Samuel Chukwueze's mum prays for him ahead of AFCON 2021 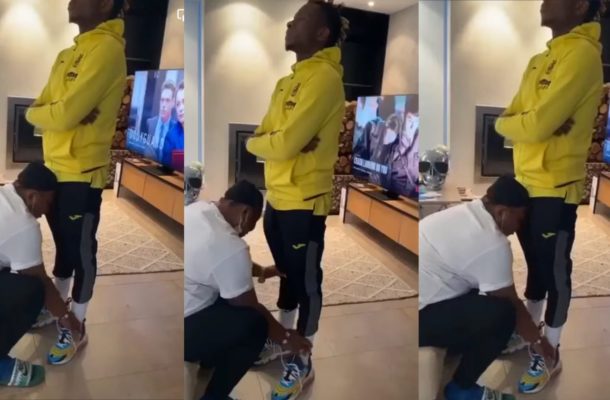 A lot has been said about football and spiritism as on countless occasions we have seen teams from across the globe indulge in one ritual or the other before games or tournaments.

A viral video has surfaced on the internet which has seen Nigeria and Villareal winger, Samuel Chwukueze receiving what appears to be prayers from his mum.

The player's mum is seen holding both feet and pouring out to her God in both local Igbo dialect and English to help his son be a success at the tournament and also prevent any misfortune.

It appears the video was short before the player departed for camp as currently the Nigerian squad is in Cameroon preparing for the tournament which starts on Sunday 9th January,2022.

The Villareal winger is expected to heavily feature in a Super Eagles squad that has been robbed of attacking talents like Emmanuel Dennis, Victor Osimhen, Odion Ighalo among others.

Nigeria will open their campaign on 11th January,2022 when they take on seven time champion Egypt in a glamour tie.

The exciting Samuel Chwukueze who joined Villareal in 2015 after helping the Nigerian U-17 side win the World Cup has been watches by a lot of clubs across Europe.

Chukwueze scored eight times in 38 matches in all competitions in his first season at the elite level.

He managed four goals in 41 games in the following campaign, before scoring five times in 40 matches last season as Villarreal ended as the Europa League champions.