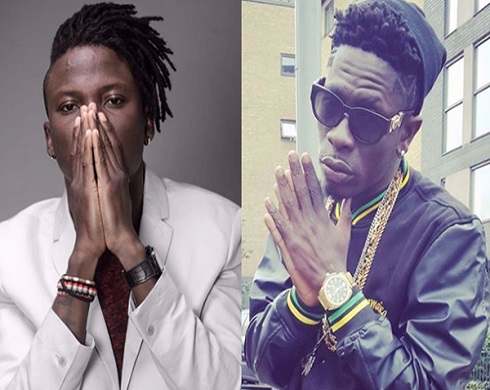 Many are of the views that; Dancehall arch-rivals, Shatta Wale and Stonebwoy could never stay in peace or wish good things for each other, but Shatta Wale's latest reaction on the Stonebwoy-Zylofon saga has shocked all.

The two arch-rivals with a huge following in the music industry will have perhaps the last chance to square things off between their camps.

Thee acts, Stonebwoy and Shatta Wale have been at each other’s throats for some time now and could use Shatta's latest video to settle it all.

Shatta Wale has made a video in which he is virtually begging his colleague, Stonebwoy, to return to Zylofon Media.

Uncharacteristically of Shatta Wale, he appears calm in this video, and his facial expression shows that he means what he is saying.

Shatta Wale shared this snapchat video of himself on his social media page.

He is captured saying: “As I dey studio dey think right now, the way the thing dey go is not good ooo. Make someone take this video somewhere. Ibi money wey we all come dey look ooo.”

This is about the third time Shatta Wale is responding to the Stonebwoy and Zylofon saga since the news broke last Saturday.

According to Wale, Stonbwoy leaving Zylofon Media would spell doom for him and his career because he might not get the money Zylofon was cushioning him with from anywhere else.

He has also asked Stonebwoy to put all differences aside and return so that the two of them would work together again.

Meanwhile, Bulldog who was alleged to have led the gang which attacked Stonebwoy last Saturday at the Champs Bar, has denied the allegation. He claims he was not even at the scene when the incident took place.

Zylofon Boss, Nana Appiah Mensah, has released a statement to apologize to Stonebwoy over the fracas. According to him, Stonebwoy is still part of the Zylofon Media group.