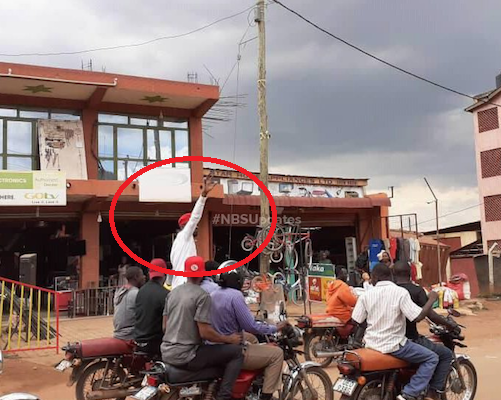 Controversial Ugandan singer and presidential aspirant, Bobi Wine escaped Police arrest on Wednesday, October 9, after he defied Police order and insisted on staging his Independence Day concert on the outskirts of the capital, Kampala.

On Tuesday, October 8, the inspector general of police, Martins Okoth Ochola said Bobi Wine’s concert dubbed “Osobola” had been cancelled because his plans fell short of crowd control and evacuation protocols in case of an emergency and adequate security for the big number of revelers.

Police said they could not guarantee the security of revelers as they would be overstretched by the Independence Day celebrations in Uganda.

Bobi Wine was reportedly placed under house arrest in other to stop him from staging his Independence Day music concert, but the singer managed to beat the heavy security deployment and surveillance at his home in Magere, Wakiso district.

On getting to the venue for the planned concert, the singer met several security officers but managed to escape police arrest according to Twitter videos posted online.

The 37-year-old reggae star, who is leading a revolutionary campaign in Uganda has joined the 2021 presidential race and he plans to end President Yoweri Museveni's 33-year-rule over the nation.