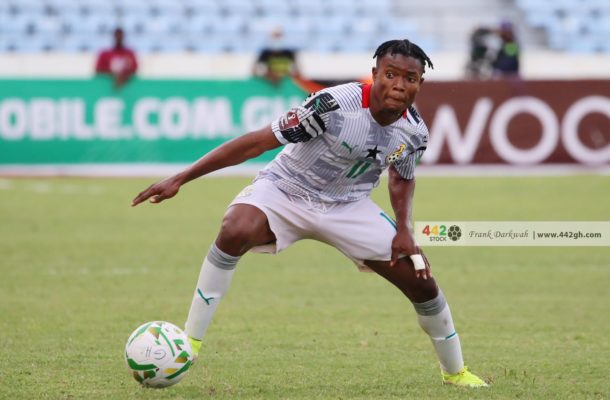 The Black Stars of Ghana made light work of Greater Accra Division Two champions Golden Kicks in a friendly match played at the Accra Sports Stadium as they prepare for the last two matches in the 2022 World Cup qualifiers.

But one particular player Abdul Fatawu Issahaku caught the eye with an outrageous strike from outside the 18 yard box.

Milovan Rajevac had at his disposal just 15 players as at Monday and they played a warm up game beating the lower tier side 5-1 in a thumping win.

Ghana conceded a goal very early in the game before returnee striker Richmond Boakye Yiadom grabbed a brace to make it 2-1 for the Black Stars before recess.

After the break the senior national team piled more misery on the lower tier side as three goals from Jordan Ayew, a penalty goal from Caleb Ekuban and delightful goal from teenage superstar Abdul Fatawu Issahaku sealed a 5-1 win for Ghana.

More players are expected in town later this evening as the team will jet off to South Africa on Tuesday to prepare for Ethiopia on Thursday 11th November.

After the Ethiopia game, Ghana will welcome South Africa three days later at the Cape Coast Stadium in a must win game.

VIDEO OF PHENOMENAL GOAL BELOW: