VIDEO: Watch all goals as Hearts of Oak draw with Elmina Sharks 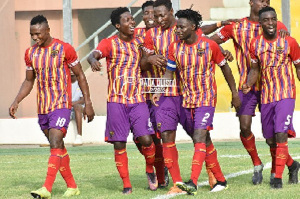 Hearts of Oak's patchy home form was again on hand as they drew 1-1 with inform Elmina Sharks in their match day 12 encounter in the Ghana Premier League at the Accra Sports Stadium.

The Phobians have won two home games all season before Sunday's game, losing two and drawing one of them while Elmina Sharks were on a three match unbeaten run.

The away side struck first in the first half despite the phobians taking the game to the away side for much of the early exchanges of the game.

Both goals in the game came inside the first 45 minutes with Dennis Mensah getting the opener for Sharks in the 25th minute before Kofi Kordzi scored his sixth goal of the season in the 38th minute to draw the phobians level.

None of the teams was able to score another goal as they both settled for a point apiece.