VIDEO: Watch all the goals as WAFA pummel Ashgold 6-1 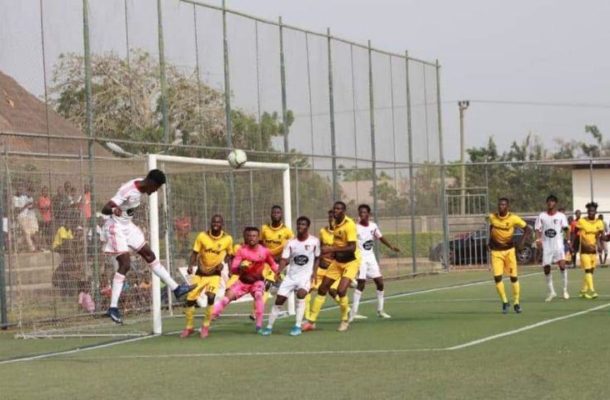 West African Football Academy (WAFA) sent Ashnatigold SC to the cleaners in their match day 12 encounter at Sogakope as they assaulted the miners by 6-1.

Before this fixture the miners were comfortably sitting atop the Ghana Premier League table having conceded just a paltry two goals with the partnership of Yusif Mubarik and Samed Ibrahim but the duo conceded six just this afternoon against a possessed WAFA team.

The home side looked to have lost the aura surrounding the once dreaded Sogakope Park as Liberty went there and beat them 2-1 breaking a 48 match unbeaten run while Kotoko, Hearts of Oak all picked up points at Sogakope.

It appeared the cat at the Sogakope ground had gone on a hiatus so the mice was enjoying picking points at will but the young academy boys have roared that aura back to life with this heavy defeat.

Wafa had gone four games without a win at home with all four matches ending in a draw with their last win at home coming as far back as January.

Two goals from Konadu Yiadom, one from Andrews Ntim,Ibrahim Abukari scored from the spot to make it 4-1 after Kofi Nkrumah drew Ashgold level early on before two goals from Daniel Owusu and Haruna Molla made it 6-1.

ENJOY ALL THE GOALS BELOW: