VIDEO: Watch Felix Afena-Gyan's brace for AS Roma against Genoa 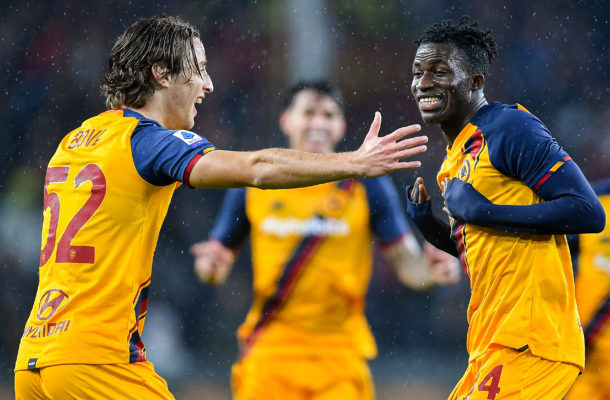 Ghanaian youngster Felix Afena-Gyan was the hero for AS Roma as he rescued his side from an embarrassing draw against Genoa on Sunday night.

The Giallorossi had the better of the first half, with Eldor Shomurodov coming close against his former club, whilst Henrikh Mkhitaryan had a fine effort ruled out after it deflected off Tammy Abraham’s hand.

Jose Mourinho’s side continued to dominate after the break but lacked a cutting edge in attack, with Mkhitaryan blazing over from a good position. At the other end, Rui Patricio denied Stefano Sturaro from close range.

However, with less than 10 minutes remaining, a devastating Roma counterattack was slotted home by teenage substitute Felix Afena-Gyan, as he scored his maiden senior goal with an excellent first time shot.

The Ghanaian capped his memorable evening in stoppage time as he curled a wonderful strike into the top corner.

Jose Mourinho gave the 18 year old striker his senior debut for AS Roma in their come from behind win over Cagliari this season in the Italian Serie A.

He was rewarded by Jose Mourinho for his inspirational form for the Roma U-19 and made his senior debut for AS Roma against Cagliari as he came on as replacement for Matias Vina in the 57th minute.

Afena-Gyan has been in good form for the AS Roma in the primevera where he has been on red hot form scoring for fun.

The 18 year old striker has started the new season on form for the Giallorossis youth side having already netted six goals in five matches.