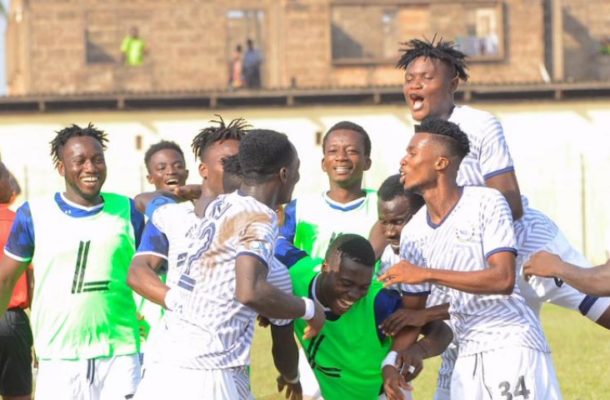 Paul Atta Agyei scored Berekum Chelsea’s second goal of the season as they recorded a 1-0 win against King Faisal at the Golden City Park on Friday. The winger smashed home a delightful cross in the 35th minute to give the Blues their first win of the season.

Chelsea thus becomes the first team to stop King Faisal this season following an explosive start to the season which saw the latter record three straight wins in their first three matches of the campaign.

The Kumasi based club shocked two-time Champions Aduana FC 3-1 at Dormaa before beating AshantiGold SC 2-0 on match day three. They opened the 2021/22 season with a 1-0 win against WAFA at the Baba Yara Sports stadium and went into the game as joint leaders with 9 points.

Berekum Chelsea began the game with some brilliant incursions and came close to breaking the deadlock in the 16th minute but Bright Amponsah missed the first chance by heading over the bar.

Collins Ameyaw also missed from close range as Frank Boateng pulled a brilliant save to deny Chelsea once more.

The Berekum lads finally got the breakthrough in the 35th minute through Attah Agyei whose curled effort beat goalkeeper Boateng.

King Faisal then took the game to Chelsea in the second half and created a number of openings but failed to take their chances.

The introduction of Atta Kusi, Emmanuel Sarkodie and Evans Sarfo changed the complexion of the game in favour of King Faisal but they couldn’t translate that into goals as Chelsea held on to win the tie 1-0 in Berekum.