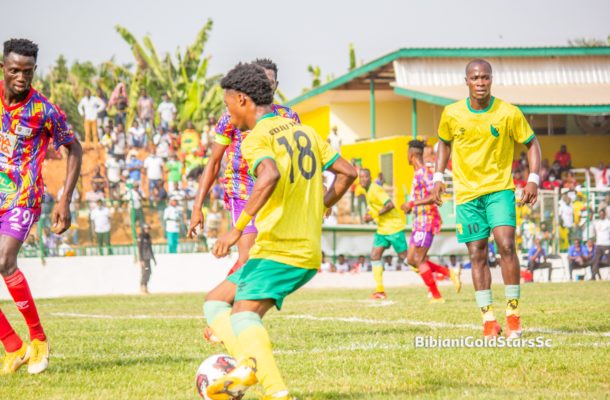 It was a solitary strike from an unlikely hero in the shape of James Sewornu in the 3oth minute of the first half that proved the difference between the two sides.

The center back turned right back for this encounter applied the finish to a nice pass from Daniel Afriyie Barnieh in what looked like a training ground routine to extend the phobians unbeaten run to six matches.

But before that goal the home side should have been ahead as Frank Adjei Jnr. struck from distance but his effort went high and wide before William Denkyi cleared off the line with a last ditch clearance after Prince Kwabena Owusu's shot was heading into the goal on the 20th minute.

Perhaps it summed up the luck of the home side who played so well but ended up on the losing side.

After recess Gold Stars pressed for the equalizer and had several penalty appeals turned down by the referee but the phobians stood firm and resisted all that was thrown at them by the Bibiani side.

Hearts goalkeeper Ricmond Ayi denied Frank Adjei Jnr who from getting the equalizer with a breathtaking save in the 68th minute as the champions held on to victory.

The champions will play against Medeama in their outstanding league game on 12th January before hosting Eleven Wonders on Sunday.