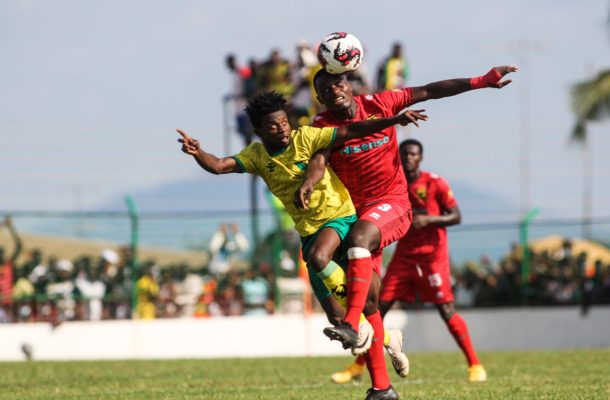 Kumasi Asante Kotoko escaped through the skin of their teeth with a slender 1-0 victory against lower tier side Bibiani Gold Stars at the Dun's Park on Friday afternoon.

A second half strike from the sensational Isaac Oppong was enough for the porcupine warriors as they run away with all the three points and made it three out of three.

It was not all rosy as the club weathered the torrential storm that came their way from the impressive home side who will rue their missed chances and the inspired form which Razak Abalora was in on the day.

Maxwell Agyemang was handed his debut in the absence of club captain Abdul Ganiyu who is on national duty while Andrews Appau was also handed his first start this season in place of Yusif Mubarik.

The home side started the game on a good note and piled pressure on Kotoko but a couple of good saves from Razak Abalora and some profligacy from the home side ensured Kotoko did not concede.

In the 20th minute the home side should have scored through Prince Kwabena Owusu but his shot was saved by goalkeeper Abalora but the follow up was missed.

Gold Stars also had a good opportunity but the shot from Charles Gyamfi was blocked by Kotoko defender Andrews Appau.

The first half ended goalless as the home side failed to utilize the numerous chances that came their way.

After recess, Asante Kotoko upped the ante and it did not take long as talented forward Isaac Oppong curled a shot in the 18 yard box to score the only goal of the game.

The home side kept pushing for the elusive equalizer but the goal never came as Kumasi Asante Kotoko kept their defensive shape.