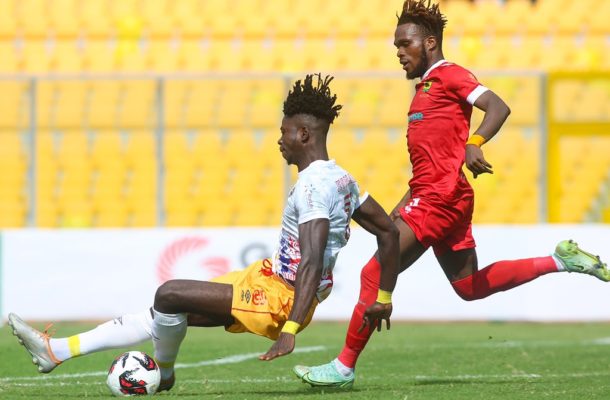 Two second-half goals were scored on Sunday as Hearts of Oak came from behind to draw 1-1 with arch-rivals Asante Kotoko on March Day three of the betPawa Premier League. Caleb Amankwah scored late to cancel Yussif Mubarik’s opener as the two giants shared the spoils at the Baba Yara Sports stadium.

Kotoko was cruising to their second successive win against their rivals but Amankwah smashed home from close range in the 88th minute to silence the home fans.

The Porcupine Warriors had themselves to blame after wasting all the decent chances that came their way especially in the first half. The League Champions were superior in the first half as they took a lion’s share of ball possession and created glaring goal scoring opportunities.

Steven Mukwala missed another begging chance but it didn't take long for Kotoko to take the lead through Yussif Mubarik in the 57th.
The defender reacted quickly in the box to scramble home to give Kotoko the lead.

The Reds held on for most parts of the game with an eye on the three points but Caleb Amankwah scored late to deny them as he snatched the equalizer in the 88th minute. Hearts are without a win three games into the season while Kotoko have one point after their first game.

The result leaves Hearts of Oak with two points from three matches while Asante Kotoko have one point with two games in hand.