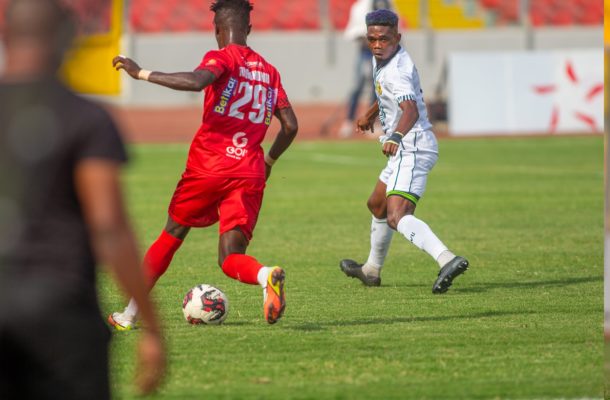 A second half hattrick from Cameroonian International Frank Mbella Etouga was enough as Asante Kotoko cruised to a 3-1 victory in their match day 12 clash with AshantiGold at the Baba Yara Stadium on Sunday.

The Ashanti derby that pit the League leaders against their struggling Regional rivals produced four second goals after the first half ended barren.

Asante Kotoko came into the game buoyed by their 2-0 win over Aduana FC last weekend while AshantiGold SC needed a win to end their 4 match winless run.

Cameroonian import Thierry Mbella Etouga set the stadium alive in the second half with a stunning hat-trick to ensure that the Reds won convincingly to move to the apex of the League table. Thierry Mbella opened his goal account in the 55th minute when he converted a penalty kick.

The referee whistled for a spot kick after a defender of AshantiGold dived to intercept Etouga’s goal bound header with his hand. The Cameroonian stood up to the task and slotted home calmly for the first goal of the match.

Etouga doubled the lead for Kotoko in the 67th minute after taking advantage of a defensive error to smash home before completing a hat-trick five minutes later after connecting a low cross from the inside of the box to seal the three points for the hosts.

With six minutes to end proceedings, substitute Elijah Addai pulled one back for the Miners who extended their winless streak to five games.

The win takes Asante Kotoko to the top of the Premier League table with 26 points – three points ahead of second placed Aduana FC who beat Elmina Sharks 1-0 at the Nduom stadium.