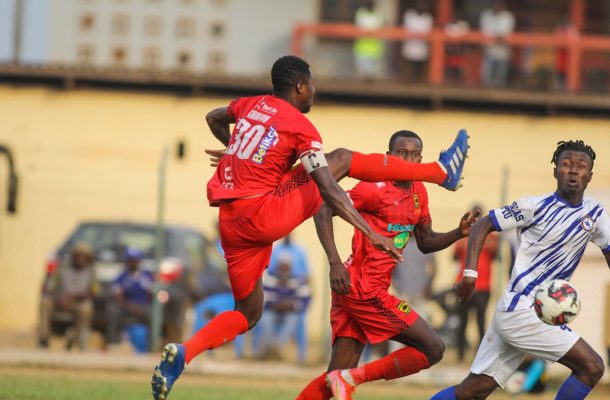 Kumasi Asante Kotoko will be grateful to their goalkeeper Danlad Ibrahim who saved them a point when clearly they could have walked away from Berekum empty handed in their match day 13 clash against Chelsea at the Golden City Park.

The home side were awarded a phantom penalty by referee Jones Akubiem late in the game out of nowhere and up stepped Anokye Badu of Berekum Chelsea only for Kotoko goalie Danlad Ibrahim to save the penalty kick.

It was a tactical game which had very little to separate both sides as Kotoko did not create much in the first half neither did the home side as both sides headed for a stalemate.

After recess the home side asserted themselves into the game more and had some chances as Kofi Owusu who joined the action from the bench failed to apply the finish to a pass from Jackson Owusu.

Asante Kotoko who were kept at bay for long spells of the game in the second half caused commotion in the Berekum Chelsea penalty area as Augustine Agyapong sent a long throw into the opposition box but it was ultimately cleared by the home defense.

Kotoko captain Ismail Abdul Ganiyu sent a free kick at a good position well wide after a foul by the home side.

Then in the 78th minute the referee who was having a stormy game pointed to the spot after almost no incident as the Kotoko players surrounded him but the penalty was effected which was saved by goalkeeper Danlad Ibrahim.

Kotoko broke after an exchange of passes between Richmond Lamptey and Augustine Agyapong but the latter shot straight at the goalkeeper.

There was nothing to separate both sides as the game ended goalless with Kotoko fortunate to escape with a draw after that penalty.