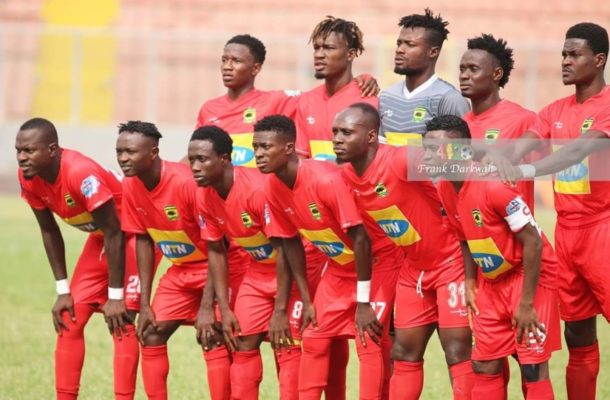 Kumasi Asante Kotoko played their first pre-season game on Sunday afternoon ahead of the 2020/2021 Ghana Premier League season which resumes next month.

The Porcupine Warriors defeated lower tier side Odweanoma FC 3-0 in their first outing since moving to Koforidua fro residential camping.

Kotoko have been training in Koforidua for the last week and decided to test their strength with a game against the lower tier side.

There was a rare start in goal for Felix Annan as was new signing Emmanuel Keyekeh, Yussif Mubarik and Emmanuel Sarkodie.

Ibrahim Osman who has returned from a fruitful loan spell with King Faisal opened the scores for Kotoko before Guinean import Naby Keita and new recruit Kwame Poku added the second and third goals respectively.

Kotoko will play some few more friendly games before they open their league campaign with a game against Techiman Eleven Wonders.

WATCH HIGHLIGHTS OF THE MATCH BELOW: