VIDEO: Watch how Afena-Gyan was physically abused by his teammate during trophy celebration 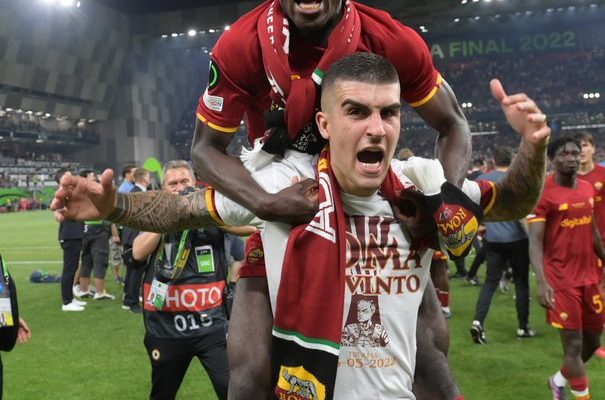 Ghanaian youngster Felix Afena-Gyan helped his Italian Serie A side AS Roma to win their first ever European title on Wednesday evening.

But during the celebrations, defender Gianluca Mancini appeared to shove the 19 year old striker before punching him whiles he was down like some school bully taking his pound of flesh on newcommers.

The video has got many people talking on social media as to how violent a trophy celebration can be from the defender.

Felix Afena-Gyan won his first career trophy on Wednesday evening in Tirana-Albania as his side AS Roma lifted the maiden UEFA Conference League after beating Feyenoord 1-0.

Feyenoord dominated possession in Tirana but Roma took the lead on 32 minutes with their first shot of the match and held on for a priceless 1-0 win.

Midfielder Nicolo Zaniolo - who had scored a hat-trick in Roma's quarter-final victory over Bodo/Glimt - produced a superb two-touch finish following a long-range pass from Gianluca Mancini.

But Roma held on to win their first piece of silverware since the 2008 Coppa Italia.