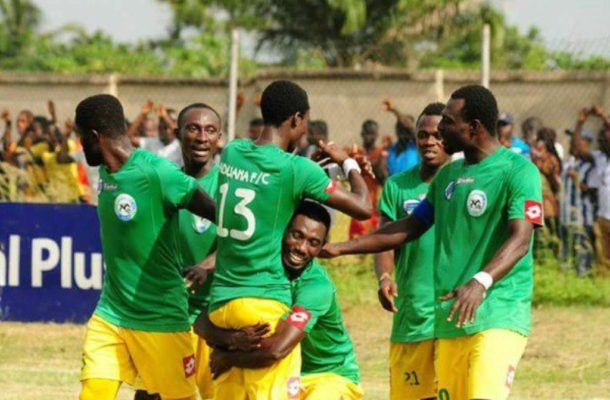 Kumasi Asante Kotoko were dealt a late blow by Aduana Stars after Samuel Bioh popped up from no where very late in the game to down the porcupine warriors.

Aduana Stars the home side were coming into this game at the back of a 5-2 battering by Liberty Professionals at the Carl Reindorf Park in Dansoman while Kotoko battled to a goalless drawn game at home.

The home side made all the right moves taking the initiative to Asante Kotoko in the game but could not finish off the chances that came their way.

As the game wore on Asante Kotoko also had decent chances to have taken the lead but the likes of William Opoku Mensah blew the chances.

It was a much more balanced game in the second half as both sides tried to break each other down but to  no avail.

Just as it appeared Asante Kotoko were taking a point away to Kumasi, Samuel Bioh popped up from no where and dragged a dagger of a shot through the hearts of Kotoko fans.

It was painful as the goal was the last kick of the game after four minutes of time added on had elapsed.

Kotoko continued their unwanted recorded of failing to pick even a point or score at the Dormaa Park since 2010.