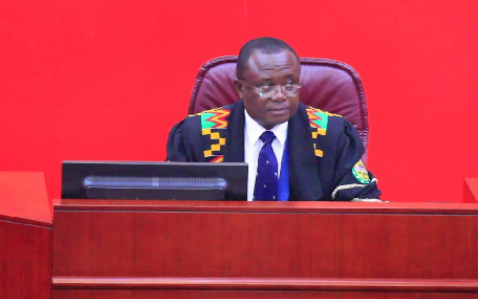 The First Deputy Speaker of Parliament, Hon. Joseph Osei Owusu has revealed that despite the House setting up a committee to investigate what he described as ‘shameful conduct’ of some elected parliamentarians during the election of the Speaker of the House on the night of January 7, 2021, the House cannot punish anyone for the conduct, MyNewsGh.com reports.

Speaking in an exclusive interview with Kwame Adinkrah on Kumasi-based Pure FM monitored by MyNewsGh.com, the First Deputy Speaker who doubles as Member of Parliament (MP) for Bekwai explained that on the occasion of the incidents, the actors who perpetrated the unconstitutional conducts were not sworn-in MPs and hence cannot be held into contempt with Parliamentary laws designed purposely to regulate the conduct of MPs.

“Kwame, I accept that it has never happened in parliament that MPs misconduct themselves during the election of the Speaker of the House.

We have our rules and processes and during that time as we had no Speaker, it was the Clerk who was acting as such but we all saw that he couldn’t be firm and hence the unfortunate happenings.

We have all accepted that the act was disgraceful and the Speaker after being sworn-in reiterated same.”

“What we can’t do is to punish anyone for the conducts. Everything done in the House has its laws and at that particular moment like you mentioned Muntaka and Carlos, they were elected Members of Parliament awaiting to be sworn in as MPs and not exactly Members of Parliament of the House yet so if you say we should punish them, what laws should we use?

We can’t use the laws of Parliament to punish them.

But one thing we have noticed is that, we took our security in the house for granted and it has given us better insight to have a tighter security so as to not repeat same in future elections to prevent it from getting out of hands.” He stated on Pure FM.

Hon. Joseph Osei Owusu further revealed that, the committee report investigating the happenings in the House during the election of the Speaker is yet to be made ready and the House will communicate to the Public when it is completed.

There were chaotic scenes in Parliament after soldiers intervened overnight to quell a clash between opposing parties (NPP and NDC) in parliament ahead of the body’s swearing-in that was set for Thursday, January 7, 2021.

Chaotic scenes erupted after a Carlos Ahenkorah, a then MP elect tried to seize a ballot box during the vote for the House’s speaker.

The ensuing clash lasted several hours until the army stepped in, with national television broadcasting the drama live.

“There was total breakdown of law and order,” said MP-elect Kwame Twumasi Ampofo of the opposition National Democratic Congress (NDC). “Looking at a member of parliament and a minister of state snatching ballot papers … was so shameful.”

Watch an excerpt of the interview below. Video Credit: Pure (95.7)FM.