VIDEO: You drink 'akpeteshie' so you are not anointed - Prophet Amoako angrily blasts Prophet Oduro 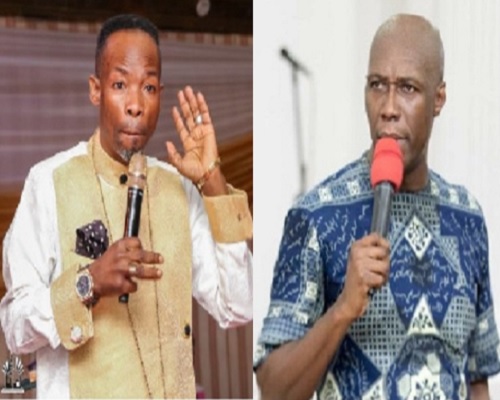 The Founder and General Overseer of Alive Chapel International, Prophet Elisha Salifu Amoako has descended on Prophet Dr. Kofi Oduro over what he says is the latter's 'disrespectful' utterances.

Prophet Oduro who is the leader and founder of the Alabaster International Ministries, sharing his sentiments on the 31st December prophecies, has described Ghanaian prophets as jokers and their prophecies ‘foolish’.

He labelled these prophets as liars who are making a mockery of God; adding that, these prophets make such ‘useless’ prophecies to gain favour from political parties.

However, an obviously pissed Prophet Salifu, who was one of the prophets who predicted a win for the NPP at his 31st December service, in an interview with blogger Zionfelix has also described Prophet Oduro as a drunkard, Ghanaweb monitored.

"I'm sure he drinks akpeteshie, he's a drunkard. I am sure, so he talks under the influence of alcohol."

Prophet Salifu, registering his disappointment, added that Prophet Oduro is a disgrace to his church, family and Ghana.

He is useless and I've never seen a useless man of God like this man before. Anybody who stands on the pulpit should be able to comport himself. Pulpit is what takes men from the pit. Alter is a place where divinity comes and meets humanity," he fumed.

The founder and General Overseer of Alive Chapel International issued a stern warning to Prophet Oduro to be mindful of his utterances, Ghanaweb monitored.

"He's not my co-equal when it comes to exposure, anointing, blessing, and travelling...He's not an exposed preacher. I'm warning him, next time, he should be mindful of his utterances...You can insult people who don't have oil for the bible says touch not my anointed."

Prophet Salifu called on all prophets to rise up against disrespectful Prophet Oduro.

"All prophets in Ghana must arise. I want to call all prophets, Prophet One, Dr Owusu Bempah...we won't sit for this guy to insult us. It is an insult to our ministry. How can you talk like that? Meanwhile, you used to call yourself a prophet... He's lost the anointing of God. the fact that he's shouting does not mean he's anointed. The guy is not anointed...God does not give anointing to people for them to insult other men of God."