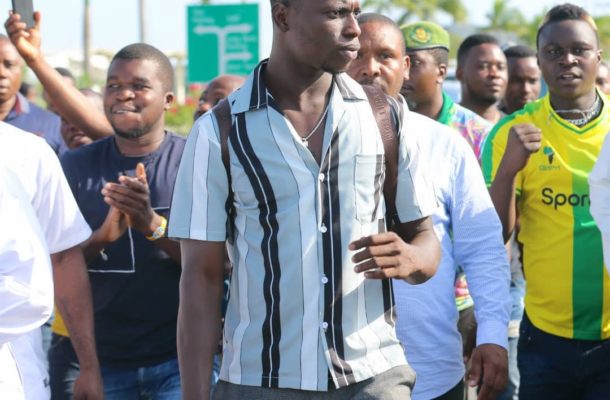 Fans of Tanzanian side Young Africans mobbed 24 year Ghanaian striker Michael Sarpong when he touched down at the airport.

The Ghanaian striker Michael Sarpong has completed his move to Tanzanian giants Young Africans ahead of the coming season.

The striker joins the Tanzanian side on a free transfer after terminating his contract with Rwanda side Rayon Sports.

Sarpong was embroiled in a controversy at his former club as he was accused of insulting the club President Sadate Munyakazi in a radio interview in April this year.

He will slot into the YANGA team after losing Ghanaian forward Bernard Morrison to fierce rivals Simba SC recently.

The former Dreams FC striker put pen to paper on Friday after passing his medical tests.

Before he was sacked from Rayon Sports he was the club's topscorer with  16 goals whiles helping them win their ninth title.

He has in the past gone on trials at Chinese club Changchung Yatai FC and in Norway.