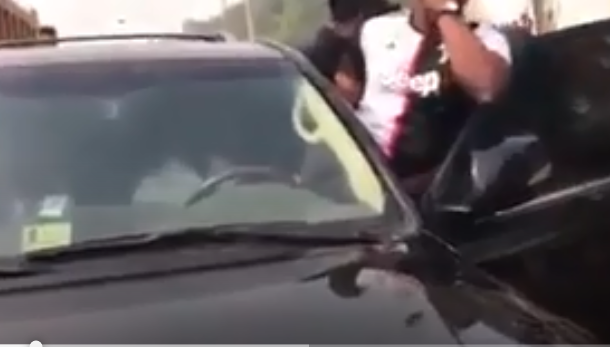 Pastor Kelvin Elson Godson Kobiri, Head Pastor and Leader of the Zoe Outreach Embassy together with his wife were heckled again, on Thursday, February 20, 2020, by some angry customers in Tarkwa, in the Western Region.

These angry men claimed to have their funds locked up in collapsed businesses, EL Real Estates and Tikowrie Capital, allegedly owned by the pastor t.

Pastor Kobiri was in Tarkwa to appear before the District Court to respond to suit against him for allegedly issuing bounced cheques.

In the video which has gone viral, the angry customers are seen surrounding the vehicle, with two of them holding on to the steer of the vehicle, an attempt to prevent him from driving.

His wife seated at the passenger side of the car is seen trying to speak to one of the customers, but that obviously fell on dead ears.

The first assault incident happened in December 2019 when some angry customers of the collapsed EL Real Estates and Tikowrie Capital accosted him in the courtyard of the Tarkwa District Court.

Before he could step out of the car, a young man angrily shoved him and was soon joined by others who would not listen to any of his comments nor the pleas of others who asked that no one assaults him.

They shoved him about violently, while a lady companion was also pushed off when she tried to intervene.

Another man with him who was using his phone to record proceedings had the phone hit from his hands onto the ground.

It took the intervention of armed policemen from the Tarkwa Divisional Police Command to whisk him away and to place him in custody for his own safety.

In June last year, some members of the Zoe Outreach Embassy stormed the church premises to momentarily disrupt ongoing service, claiming that their funds had been locked up in two businesses Pastor Kobiri encouraged them to invest in, alleging also that he owned those businesses - EL Real Estates and Tikowrie Capital.