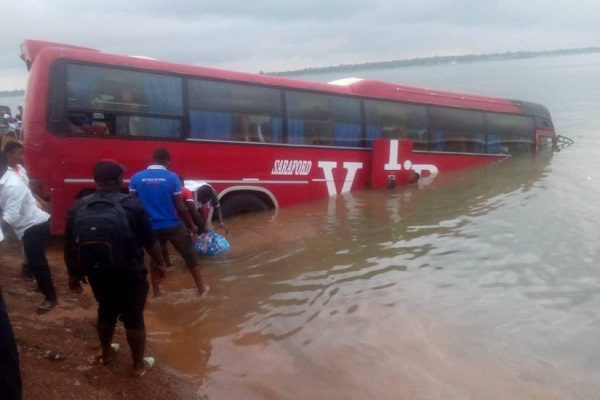 A VIP bus enroute to Wulensi in the Northern Region on Thursday morning plunged into River Oti at Dambai in the Krachi East Municipality.
The bus with the registration number GT 5313-19 which is believed to be travelling with passengers from Accra to Wulensi plunged into the river while manoeuvring to get onto the pontoon to cross to the other side.

A rescue operation failed to yield the needed result as at 0800 hours when the Ghana News Agency (GNA) got to the scene but the personal effects of passengers and other items such as motor bikes and bicycles were later salvaged from the river.

Obed Kagbetor, a passenger on board told the Ghana News Agency (GNA) that the driver instructed them to alight from the bus to enable him pack on the pontoon and the next thing was the pandemonium and struggle for safety. He suspected brake failure.

There were no casualties but an excavator that was deployed to pull out the bus was unsuccessful until a Winch tractor successfully recovered the bus from the River.

The Motor Traffic and Transport Division (MTTD) refused to speak to the GNA as well as the driver and his mate.