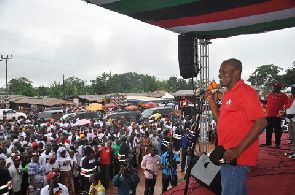 Vice President Kwesi Amissah-Arthur has impressed upon the people in the Central Region to renew the mandate of President John Mahama to guarantee the continuation of infrastructural projects in their communities.

Additionally, he underscored the need for the people to elect the parliamentary candidates of the National Democratic Congress (NDC) to further guarantee them sustained development in the constituencies.

Mr Amissah-Arthur, who addressed various rallies as part of his campaign tour of the Central Region to canvass for votes ahead of the forthcoming general election, consistently asked the people to ignore the call for change by the New Patriotic Party (NPP).

The final days of the campaign took the Vice-President to the Upper Denkyira West and East, Twifo Atti-Morkwa and the Hemang Lower Denkyira constituencies where he introduced the party’s parliamentary candidates to the people.

The NDC team took turns to address mini-rallies at Ayamfuri in the Upper Denkyira West Constituency where the parliamentary candidate, Mr Ambrose Amoah-Ashyiah, was introduced to the people.

At Kyekyewere in the Upper Denkyira East Constituency, Mr Amissah-Arthur addressed a durbar of the chiefs and people of the community where he called on them to vote for the NDC in the election.

The two constituencies have always been held by the NPP. Unhappy with that development, the Vice-President asked the people to vote for Mrs Emelia Ankoma, the NDC parliamentary candidate, and President Mahama.

The durbar was held on the premises of a completed day senior high school which the NDC team used to make a case for the re-election of the President.

The Vice-President, on day four, interacted with cocoa farmers at Morkwa Ahenkro and addressed a mini-rally at Twifo Anyinase in the Twifo-Atti-Morkwa Constituency where he introduced Mr Samuel Ato Amoah, the sitting Member of Parliament (MP), as the NDC parliamentary candidate.

At Atti Bimponegya, a predominately Ewe-dominated community in that constituency, Mr Amissah-Arthur and his team addressed a durbar and campaigned for the retention of the NDC in power.

Mr Amissah-Arthur’s tour ended with a durbar at Wawase in the Hemang Lower Denkyira Constituency where he introduced Mr Joseph Foster Andoh, the incumbent MP, as the party’s parliamentary candidate.

At each of the places they visited, the various traditional authorities applauded the NDC government for the numerous development projects in their respective communities.