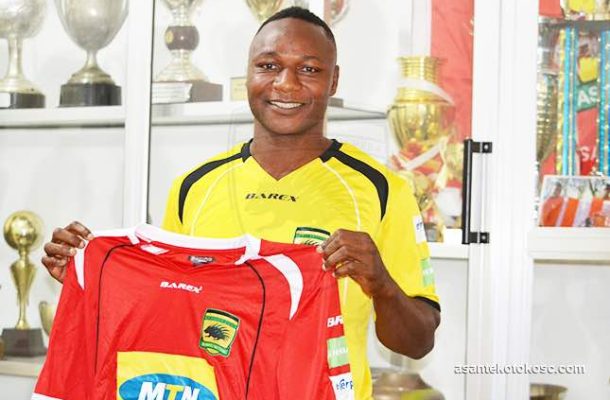 New Asante Kotoko defender Wahab Adams has revealed in his first interview since joining the club that he has fulfilled his boyhood dream by signing for the Porcupine Warriors ahead of the new season.

Wahab penned a 2 year deal with Fabulous club after leaving Aduana Stars where he played for seven years.

The defender told the club’s official website that he was raised in a Kotoko home and all his family members are supporters of the great club.

The new signing also revealed he always dreamt of Kotoko even when he was representing the ‘Ogya’ club.

The towering defender said he is privileged to have completed his dream move and thanked everyone who made it possible.

''Firstly, I like to thank God for sending me this far. Secondly, I'm grateful to my former club Aduana Stars for giving me the exposure which made Kotoko to see me.

''Thirdly, I will like to thank the Kotoko board members and supporters especially Dr. Kyei. God's blessings for all of the them.

He pleaded with the fans to be patient with him as he finds his feet at his new club and promised to reward them with spectacular performances.

Wahab also issued a rallying cry of unity among the playing body, urging them to come together and fight for laurels next season.