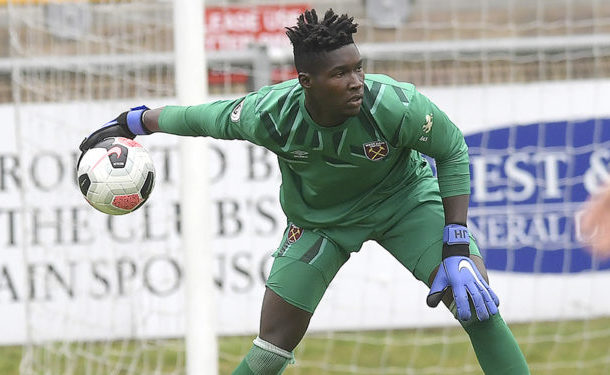 Premier League club, West Ham are set to send Ghanaian goalkeeper Joseph Anang on loan in the coming transfer window as the Youngster continues to shape his talent.

The 19-year old has been the safest pair of hands for the Hammers Under 23 in the Premier League II keeping eight clean sheets and conceding 18 goals in 17 league games as the London club sit on top of the log.


According to English tabloid Football London, the young Ghanaian will be offered out temporary next season to build him up as a future replacement for Lukasz Fabianski who is getting to the twilight of his career.

The talented shot stopper has been training with the West Ham senior team since the start of this year and he is one player manager David Moyess has high hopes on.

Born in Ghana, Joseph Anang joined West Ham on a scholarship in 2017 after impressing in trials and featured for the Under 18’s before being promoted to the Under 23 last season.


Anang has been capped just once by England at Under 19 level and he is still eligible to represent Ghana.