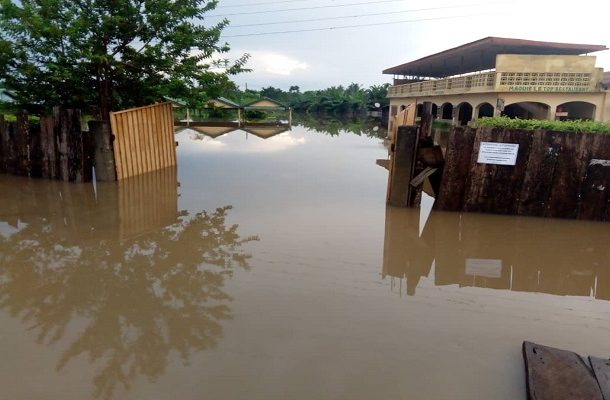 The River Disue in Enchi has overflowed its banks following torrential rains currently being experienced all over the country, causing floods in parts of the Municipality.

Flooding in the Aowin capital is nothing new as it has become a usual phenomenon and this season left no surprises.

The floods have submerged key places in the township and forced many residents to abandon their homes for fear of being drowned.

Our correspondent on grounds, Ali Asumana a.k.a Authentic reported that, residents around Kramokrom station, Accra station, Enchi fitting shop and Jensue road have deeply been affected.

According to him, a popular restaurant in the town, Maquis Le Top, located around Nakaba area is also flooded forcing its operators to shut down the eatery.

He says the floods have also taken over the Kwaem Business Centre (a sachet water company).

Residents were seen salvaging their household appliances and other properties.

Others who were unable to walk through the floods turned to use alternative routes.  School children are either lifted or made to board vehicles before they could go to their destinations.

The season currently being experienced in the country has caused the destruction of properties from the Northern sector down to the South.

The Ghana Meteorological Agency (GMet) has however predicted that there will be more rains in the coming months.

The agency said the volume of rain being experienced across the country in recent times may appear to be abnormal but Head of Forecasting at GMet Mr. Joseph Poturphy said the Agency is collating the rainfall data to determine if the rains being experienced currently are unusual.

Meanwhile, the National Disaster Management Organisation (NADMO) has cautioned Ghanaians living in flood-prone areas to move to higher grounds whenever it rains to avoid any floodings that may occur.