When I saw Apostle General Sam Korankye Ankrah on stage 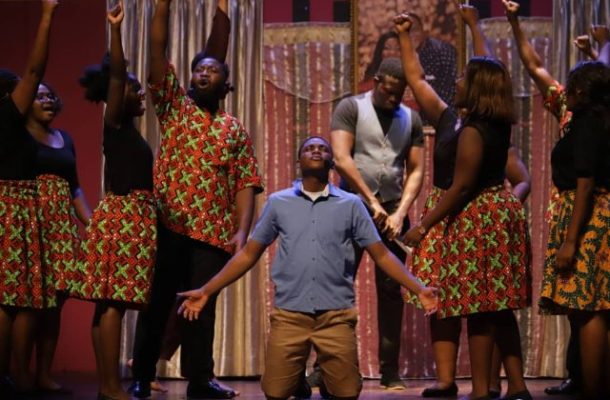 After my experience with Ebo Whyte’s Nicholas, I was more than excited when I heard ‘Final Warning’; his latest play was going to be a biopic on Reverend Sam Korankye Ankrah.

The Apostle General as he is affectionately called by most Ghanaians is the founder and leader of the Royal House Chapel International. With a following of over 30,000, Rev Ankrah is one of the most influential leaders in the country.

While most pastors have had their rags to riches stories told over and over again, Sam Korankye Ankrah is a very private person. An opportunity to know this man, not just the surface story but intimate details that can also be told by close sources was a dream come true.

A week before the show, I already had my ticket and a date for the night. Going with a friend was important because as a known fan of Ebo Whyte, I didn’t want to come out of the theatre without a second opinion, I may be biased but I knew she will not.

There was a mini crowd at the National Theatre when we reported at 7:55 pm. We were ushered into our seats by well-dressed men and women in branded shirts. Everyone seemed relaxed and excited, ready to be told the story of this amazing leader who does not have a scandal to his name.

The curtains lifted to a beautiful, church-like stage. Soon the whole place was filled with music and the cast gave us their introductory performance. Powerful voices, I said and throughout the show, it was all I kept saying.

There were about 25 people on the stage, twice the number of cast I have seen used by Ebo Whyte in a play.

The production began with a friendly conversation between a ‘guardian angel’ and the ‘accuser of the brethren’. The facts are simple, it is Sam Korankye Ankrah’s 60th birthday and his life was going to be reviewed. In short, has he lived up to expectation or he has wasted his years. After the first confused moment of meeting these two spiritual beings and the presences of other heavenly beings as jurors to the case, the Apostle General begins to defend his life.

He tells of the loveless marriage between his parents, the irresponsible nature of his father towards his education and how his mother served as his backbone and support system.

Acting the part of the accuser, Michael Akoto Sasu and Adrian Afun who was the younger Sam Nkorankye Ankrah stole the heart of the audience.

They were funny, talented and just had a way of getting people to appreciate their role.

Throughout the drama until he ended his part, Adrian stood out for me. I was practically praying for him when he had to perform his first miracle in the Volta Region and was genuinely happy when he got married to Rita, one of the girls in his youth fellowship.

But my date insists, her favorite character is Sam Korankye Ankrah’s mother played by Akua Serwaa Agyeman. Pat, who was forced to marry her husband, never forgave her aunty and was always seen fighting her aged-husband on stage. She was smallish, had an amazing voice and could keep her own in any agreement.


While a lot of scenes got me emotional and sitting on the edge, I had renewed respect for the Apostle General when he revealed that even though he cheated his in-laws out of their bride price, he made it up two years later by presenting double of everything he was expected to give.

What kind of man is this? I kept asking myself. He didn’t have to, but he did. Well, the accuser wasn’t so pleased with that information. Indeed the theme song ‘Oofeetso)’ meaning ‘you have overdone it’, was just perfect and when Adrian started to rap the part of Sarkodie, I was on my feet, jumping and screaming.

It’s true; Sam Korankye Ankrah didn’t want to be a pastor because he wanted to make money. It’s true he left the country for greener pastures leaving his newly wedded wife here in Ghana. It is true a final warning from God forced him back to his initial calling and it is true he almost died immediately he stepped out of the airport.

But it’s more obvious he had a listening ear and a willing spirit. That he made the right choice when it came to his marriage, that he survived situations that broke people down and he has God to be grateful to for everything.

With the help of Ebo Whyte I have seen Archbishop Nicholas Duncan-Williams on stage. I have seen and understood Sam Korankye Ankrah in a way, I could only imagine and I can’t wait for another African story to be told in this beautiful way.

Every story may not be from rags to riches but every story is unique and needs to be told. Imagine the lives of Pastor Mensa Otabil, founder of the International Central Gospel Church, Dag Heward-Mills, founder of Lighthouse Chapel and Agyin Asare, founder of Perez Chapel International being told on stage.

Their weakness, strengths, human nature all portrayed to the people who love and adore them. Imagine knowing something deeper about your pastor than you ever thought possible, and then you will appreciate this biopic by Roverman Productions that left many smiling and content.

‘Final Warning’ will be repeated from Friday, March 6, 2020, to Sunday, March 8, 2020. It will run twice a day, 4pm and 8pm each night before being put to rest and acted in December as part of the Festival of Plays.