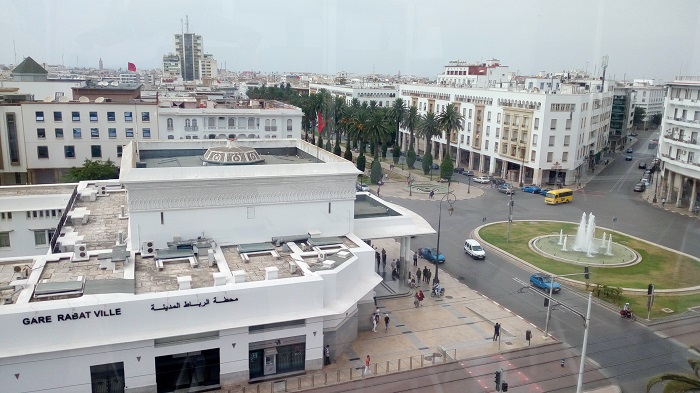 Rabat with its well-paved streets, pedestrian walkways and laid-out buildings is indeed a beautiful sight to behold, especially at night when the whole city is set alight with bright street lights.

It may be one of the vestiges left by the colonial masters . The French had Morocco as their defacto protectorate from 1912 to 1956 before the country gained its independence, but it has been well kept and enhanced to make the city very attractive.

For someone coming from a country still grappling with energy supply challenges, it came as a very huge relief and thrill to see not only buildings and streets lit up but also palm trees lining the streets adorned with decorative lights.

It first looked improbable, but then a thorough search and cursory glance around showed that the political capital of Morocco, Rabat, which is located on the northern Atlantic coast, indeed had a colour theme which was white. So imagine rows of blocks of buildings with spotless white colour lighted at night every day of the week. The glowing effect is at the same time mesmerising, enchanting and soothing.

And adding to these are scores of lovely water fountains of different shapes, designs and sizes that dot the city at every roundabout. A large part of the city has, therefore, become a tourist attraction with people engaging in photo sessions every now and then.

People convoke in their numbers on the nicely manicured lush lawns, pavements and around the fountains after the day’s work just to ease stress.

For a country that is in the arid region of Africa, it is amazing how water is not only available all year round but that there is enough to also create gardens in the cities and keep them green.

No wonder there are no traditional night falls in Rabat and the other major cities of Morocco such as Marrakech.

Aside the fact that darkness falls only after 9 p.m. because the sun is even up at 8p.m., the evenings have become the socialising and outing times and a first-timer would always think there was a major social event taking place. But no, it is always people enjoying the open blue skies, beautiful scenery and outdoors enhanced by scores of artificial lighting, and perhaps to also escape from the heat indoors – during the day temperatures could rise as high as 45oC in some parts of the country.

Interestingly, it is not only Rabat that boasts a colour theme. The brick red theme of Marrakech, the tourism headquarters of Morocco, is evident.

There may be old buildings in Marrakech but they are very difficult to tell apart from the new ones as they all spot the same unmistakable earth or brick red colour.

Enquiries revealed that inhabitants who used to live in earthen houses decided to maintain that same earth colour when they went modern with blocks of buildings, all of which have an average of five floors. Marrakech, which will host the upcoming COP 22 climate change conference, is also a well-planned city with broad and smoothly asphalted streets and fountains at major turns and almost all the hotels in the city.

Like Rabat, street and decorative lights adorn Marrakech city at night and make it even more spectacular at night. The nights are also livelier than the daytime and people troop out into well-lit open spaces as if they were attending some special events.

Children can also afford to play outdoors after school and after doing their homework as the night takes its time to descend on the country.

Colour themes are not the preserve of Rabat and Marrakech. While the small Quarzazate solar plant town has also chosen the earth red colour, the fast developing port city of Tanger is also predominantly painted in white. It is only the densely populated commercial capital, Casablanca that does not seem to have a particular colour theme but embraces all.

In sub-Saharan Africa, trams are thought to be the preserve of European countries but they are a means of transport in Rabat, Casablanca and other Moroccan cities.

These complement the aircraft (mostly the national carrier – Air Maroc), modern trains, inter city buses and the differently coloured taxis (blue in Rabat, gold in Marrakech and white or red in Casablanca)  that transport the travelling public across the country on a very good road network.