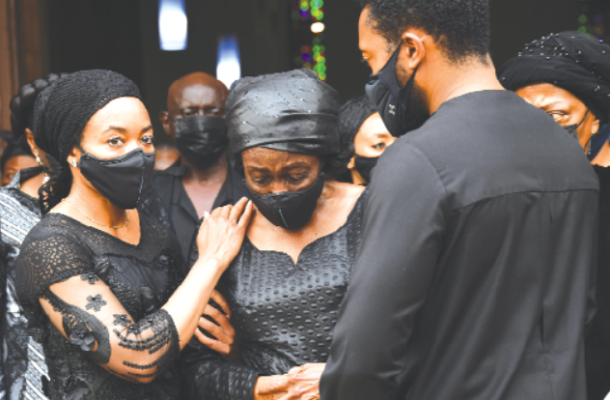 This was revealed by his eldest daughter, Dr Zanetor Agyeman Rawlings, during the final burial service of her father.

Whilst eulogising her father, she noted how his drive for change and revolution reflected in all regards of his life, including the naming of his children.

In her tribute, she expounded the names her parents gave herself and her siblings, noting how each was symbolic of one ideal or another, of her father.

Each of the four children she said, was named after a warrior, with the exception of the first whose name signified his quest to free the then ‘darkened’ country, from its gloom.

“Zanetor, an Ewe extraction name, a command meaning ‘darkness must cease’. A name you made and gave to your first child during the difficult times in Ghana as you hoped for an end to the corruption and economic hardship,” she explained.

For her younger siblings, she explained,

“Your second child, Yaa Asantewaa of Ashanti extraction in modern-day Ghana. You named her after Nana Yaa Asantewaa of Ejisu. A queen mother who led her people to war against the British colonialists after the king of the Ashanti kingdom was exiled.

“Your third child, Amina, a name of Arabic extraction. You named her after the warrior Queen Amina of Zaria, of Modern-day Nigeria. The first woman to become a leader in a male-dominated society. She expanded the territory of the Hausa people, to its largest border through conquest and opened trade routes among others.

“Kimathi, of Kikuyu extraction in Kenya. You named him after Dedan Kimathi, a Mau Mau military and spiritual leader who led his people, in several uprisings that led up to the independence struggle against the British Colonial rulers.”

The four-day burial rites of Ghana's longest-serving Head of State is being climaxed today.

Flt. Lt. Jerry John Rawlings who passed in November 12, 2020 will be laid to rest at the Military Cemetary in Accra.

Prior to this, a Catholic Requiem Mass and a vigil were held in his honor on Sunday, January 24th, followed by a 2-day Laying-In-State ceremony at the Accra International Conference Center for dignitaries and the general public to file past.