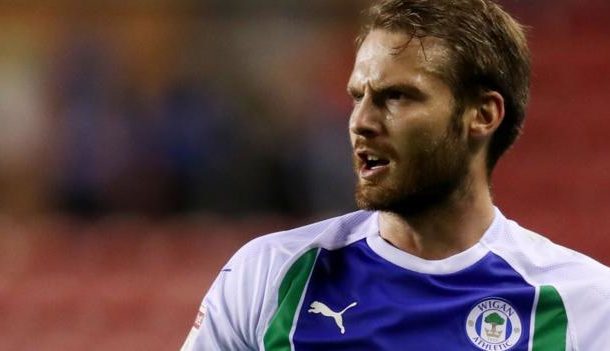 Nick Powell's last appearance for Wigan was on 28 NovemberFollow live text coverage on Saturday on 14:00 GMT

Wigan's joint top scorer Nick Powell is a doubt for the visit of Birmingham City with a hamstring problem.
Antonee Robinson (ankle) and Michael Jacobs (hamstring) are also out but Kal Naismith is available after serving a one-game ban in the defeat at Ipswich.
Birmingham will assess skipper Michael Morrison (hamstring) ahead of kick-off with fellow defender Marc Roberts (calf) out for several weeks.

Wigan have only lost one of their last eight league games against Birmingham (W4 D3), a 3-1 defeat in January 2015.
Birmingham's last league win at the DW Stadium was back in December 2009 in a Premier League fixture, drawing two and losing two of the four matches there since.
There have been more penalties scored in games involving Wigan this season than any other Championship team (four scored, four conceded).
Birmingham have found the back of the net in each of their last seven away league games - they last scored in eight consecutively in October 2015.
Wigan have lost their last two league games by a single goal to nil - they have not lost three in a row without scoring since December 2016.
Birmingham forwards Che Adams and Lukas Jutkiewicz have both netted 10 league goals this season; the first campaign that the Blues have had two players or more score 10+ in a season since 2011-12 (Marlon King, Chris Burke, Nikola Zigic).