With World Cup place secured, Ozu's focus is on the final 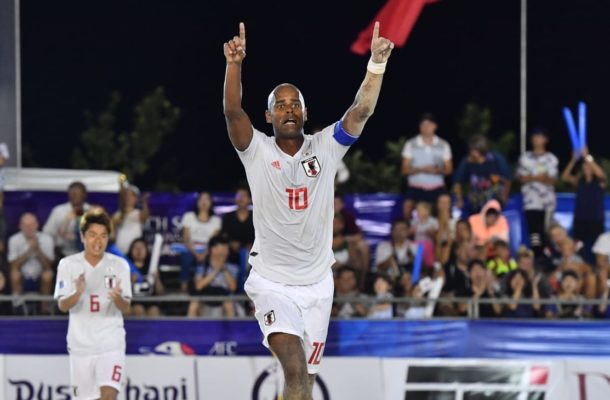 Pattaya: Japan star Ozu Moreira expressed his joy at securing a return to the world stage but has already turned his focus towards becoming champions of Asia, after he helped his side cruise into Sunday's AFC Beach Soccer Championship Thailand 2019 final.


The towering Japanese captain scored two sensational free-kicks in his side's 6-0 semi-final win over Palestine on Friday, taking his tournament goal tally to eight in five matches and setting his side up for a blockbuster decider against United Arab Emirates.

Japan's win also guarantees their return for a tenth consecutive FIFA Beach Soccer World Cup, but Ozu said, while one goal has been achieved, the major prize remains up for grabs.

"It's always a good feeling to know we can play in the World Cup," said the 33-year-old, who is set to appear in the global Finals for the fourth time later this year in Paraguay.

"The World Cup is the most important tournament in the world, so we have been working hard to make sure we will be in the next World Cup, but now we're thinking about being champions here.

"We still have one more step to go."

Japan were too good for a Palestine side appearing at the semi-final stage for the first time, establishing a 3-0 lead early in the second period, before scoring three goals in the last six minutes to bring up their half-dozen.

The match came just 24 hours after the East Asians dramatically overturned a two-goal deficit to beat defending champions and world number two side Islamic Republic of Iran 3-2 in an extra-time epic of world class quality.

Ozu said it was a mental challenge to get over such a monumental match so quickly.

"Our coach spoke with us about it," he explained. "We had a big emotion yesterday (against Iran) It was a really big fight, and we played until extra time. and gave our best.

"That's why here today I think we had a bit more tension, you know. We still had power, we still played well, but we could have had a bit more, and finished the game more easily.

"It was the first time Palestine had a chance to qualify, so they were fighting hard too. That's why it was not an easy game for us."

Brazilian-born Ozu is one the game's global stars. He has been voted among the 'Top Five' at the prestigious Beach Soccer Stars Awards in four of the last five years, and leads the scoring in Pattaya alongside teammate Shusei Yamauchi, who has eight goals of his own.

Japan's potent attacking weapons are clear for all to see, but their star man believes all of Asia's heavyweights are at a similar level, and is expecting another tough test in the final against the UAE.

"You know, Japan, Oman, Iran, UAE... we are all good teams. We can all fight for a good placing in the World Cup," he said.

"The UAE work hard. I think it will be another fight. It will be another game which is not easy, for both of us, but we are focused to be champions and we will give our best to end up there."