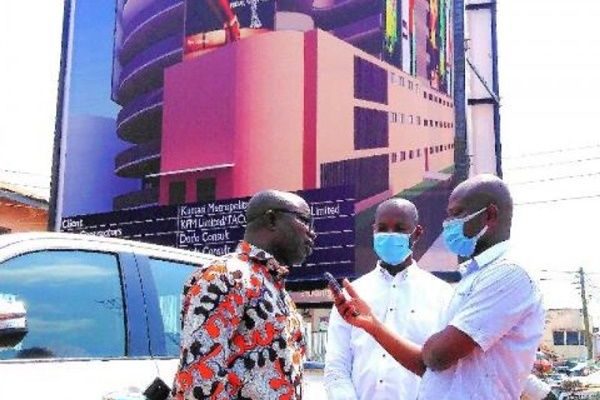 The Kumasi Metropolitan Assembly (KMA) has reinforced its determination to decongest the Central Business District (CBD), one of West Africa’s busiest commercial areas, to ease vehicular and traffic congestion.

An average of about 1.5 million people, including traders from neighbouring Togo, Burkina Faso and Cote d’Ivoire, Niger, Mali and other countries in the sub-Region throng the CBD for varied commercial activities almost every week.

Mr Osei Assibey-Antwi, the Metropolitan Chief Executive (MCE), in an interview with the Ghana News Agency (GNA), Kumasi, on the sidelines of a handing-over ceremony for work to commence on a multi-storey car park, said the Assembly was currently reviewing the on-street parking initiative introduced some few years ago.

“Most business owners within the CBD are abusing the system, and this has contributed to worsening vehicular and traffic congestion,” he said.

It is expected to be completed in three years.

Upon completion, the project, which is being executed in phases, would make provision for 800 car parking lots, banking halls and offices for utility services, a clinic, amongst others.

Mr Assibey-Antwi said the facility was being “strategically sited at the very heart of the CBD in order to enhance commercial and business activities.”

Consequently, members of the Ghana Private Road Transport Union (GPRTU) currently operating at the project site were being relocated, he stressed.

He explained that some of the floors on the multi-storey car park would be reserved for commercial vehicles.

Mr James Kwarteng, Chief Executive Officer (CEO) and Managing Partner of the ‘BRIGHTMORE Group’, one of the investor groups executing the project, assured of value for money regarding the work to be done on the facility.

He said the growing numbers of commuters to the CBD had necessitated the project, noting that the contractors would be working in partnership with the KMA to enhance business growth in Ghana’s second-largest city.