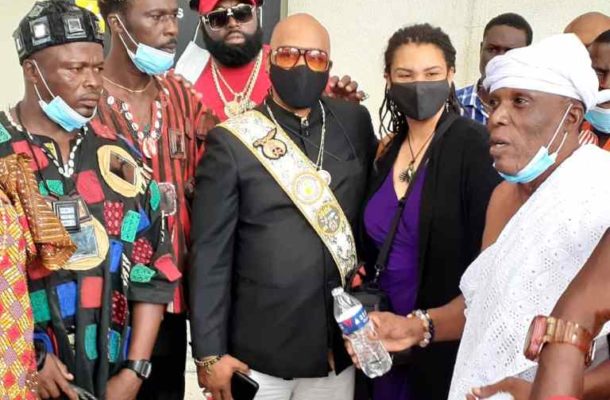 The Grand Master of World’s Masonic United Nations, Frederick Lee Mc Henry, Sr has touched down at the Kotoka International Airport (KIA) from the United States of America (USA).

His visit to the country is on the invitation of Nii Ayitey Anumle Oyanka I, the overlord of Oblieman in the Ga West Municipality of the Greater Accra Region of Ghana.


The Delta flight touches down at exactly 13:30 pm, Mr. Lee Mc Henry after checking out from the airport was met with some elders and the delegation of the overlord at the arrival hall.

He was also given a warm welcome by the cheering crowd amid drumming and dancing.


Though, his reasons for the visit of the country is not known yet, but indications shows he was in the country to participate in an event.

He is acompanied by his wife through Laremy Wade also known as Nii Adama Djata, and Graciela Blackstone also known as Queen Naa Adarku Mansa, who rules as the Queen of Business Development from United States Maryland for Ga State of Tunnmaa We Royal Dynasty.