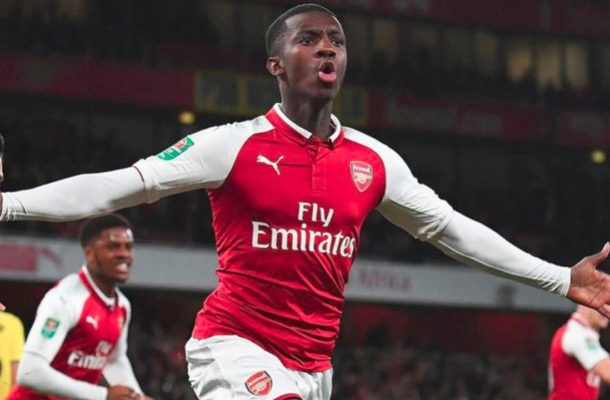 Youngster Eddie Nketiah scored an impressive hat-tick for English Premier League side Arsenal as they walloped championship side Charlton Athletic 6-0 at the Emirates stadium in preparations for the return of League action next weekend.

The game was played behind closed doors, with the officiating taken care of by the coaching staff of both teams.

The Gunners went in with a two-goal lead at the break against the Championship opponents with goals coming from their attacking duo of Alex Lacazette and Pierre-Emerick Aubameyang.

Lacazette opened the scoring with a fierce strike from outside of the box, before a darting run from Aubameyang on the left flank ended with the Gabon international curling the ball inside the far post.

The third goal came in less glamorous fashion, with Eddie Nketiah fastest to tap home in a second-half goalmouth scramble that came after a Dani Ceballos free-kick.

Arsenal made it 4-0 when Nketiah found the net once more, this time coolly converting a one-on-one.

But there was still time for the academy graduate to complete his hat-trick after heading home a fine ball from Joe Willock.

Willock then added a goal of his own just moments before the final whistle, with a first-time strike that sent the ball into the top-left corner from the edge of the box.